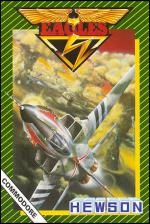 In the early half of the 29th Century, man has finally become civilised: he still fights wars, but now genetically engineered beings to do all the dirty work.

In the continuing 300 year war against an alien force, Earth's prime assault weapon is the 'Eagle' fighter - manned by genetic pilots and dealing death with absolute precision.

As another fleet of alien attackers homes in for the kill, your squadron is called into action. Flying in pairs, both craft are displayed at once against split-screen scrolling backdrops, with the option to either play solo, or with another person as a team or in competition.

Your aim is to annihilate the attacking aliens, and also to collect the alien Messenger Droids - small glowing spheres containing vital enemy communications. Flying into a droid stores it aboard your vessel until you pass over the collection chute, where it is dropped into a pipe for delivery to your own forces.

When five droids have been collected, a Devastator device becomes available for addition to your armoury. Once activated, this destroys all aliens in your vicinity.

At the end of an attack wave, you are called upon to confront the main Zeta fighter - a computer-controller interceptor craft of awesome firepower. Only when this has been disabled (that is, blown to atoms) does the next wave of aliens appear - more ferocious and devious than ever.

When destroyed, these later alien vessels transmute into different craft, becoming increasingly dangerous and difficult to hit. Fireballs appear on later levels - unaffected by the Devastator device, a number of hits is required to ensure their capitulation.

Your ship is destroyed on collision with alien fire, and you have three ships with which to battle the enemy.

The single player option is not exactly enthralling, and the two players on screen option does little to redeem the situation. There is no feeling of playing as a team since there is minimal interaction between the two.

The actions of one player do not really affect the other to any great extent. A more cosmetic point is the ludicrously large main sprites, which look huge against the small playing area.

This makes the game look cluttered and spoils the whole split-screen effect. A technically slick shoot-'em-up, which looks special at first, but is disappointing to play shortly thereafter.

The trouble with this is that the sprites are far too large. There's simply no room to manoeuvre - it takes an entire screen length to turn, and consequently it's very difficult to avoid enemy fire.

If the planes were smaller then there'd be a feeling of freedom, rather than the confinement and frustration which are experienced during play.

The action is a mite repetitive too - there's little to do other than fly around, pick up a pod, drop it off, fly around... It's a shame really, the game has got real potential which sadly hasn't been realised.

This fast, smooth-scrolling, split-screen shoot-'em-up for one or two players would be great fun - if it wasn't for the ludicrously small playing area.

The main sprites are far too large, but even if they were smaller it wouldn't make Eagles any more playable, as the action is a little too slow and monotonous for my liking.

Eagles looks good, and to all intents and purposes it could have been a sort of two-player split-screen version of Dropzone - but sadly it isn't, and the effort seems wasted.

Presentation 67%
Several options but little else.

Hookability 63%
Visually inviting but not so addictive.

Lastability 39%
Monotonous blasting action fails to entertain for long - even with two players.

Value For Money 43%
Not much excitement on offer for nine quid.

Overall 74%
An ineffective one or two player game, spoiled by cosmetic imperfections and limited gameplay.

An ineffective game, spoiled by cosmetic imperfections and limited gameplay.