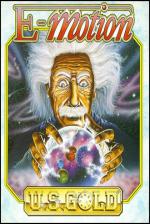 Apparently, E-Motion is US Gold's first 'New Age' game for the unstressful, relaxed lifestyle of the 1990s. However, this extremely devious puzzle game is more likely to double your stress level!

In a microscopic world of atoms, molecules, and particles, you control a sphere by rotating left/right and thrusting. In each of fifty levels the aim is simple: knock like-coloured spheres (which represent atoms) together to make them disappear. If you're not quick enough they explode, reducing your energy level. If two differently coloured spheres collide, a smaller pod ball is produced - this can either be collected for extra energy or left to 'grow' into a big sphere.

To make things infinitely more difficult, some of the spheres are connected by elastic (these represent molecules) which can easily get wrapped around the obstacles which appear on most levels.

When your energy level reaches zero, you lose one of four lives. Invaluable extra lives are earned for every 25,000 points scored. Extra points can be gained on the bonus screens which appear after every few levels - these involve collecting pods in the right order within the time limit. If you manage to get halfway through the game's 50 levels and die, you can continue play from level 25. There are also options to save the game and practise any level.

As well as playing solo, you can play simultaneously with a friend, with a communal score and lives - so you must cooperate instead of competing. On some levels, the two players are connected by elastic, and sometimes even to some of the spheres, making life very difficult!

Simple ideas are often the best, and knocking balls together has to be one of the simplest game concepts since billiards.

Graphically, it's also very simple (if slow and Spectrum-esque on the C64) the functional with balls and elastic moving realistically with inertia and momentum.

Solo games are fun, but it's in simultaneous two-player mode that the game really comes into its own. Without extensive cooperation, you invariably end up hysterically knocking the spheres all over the place, the numerous resulting pods making the play area resemble a Smarties ad. It's all great fun, but at times so frustrating you'll want to do something more violent than bash balls together!

E-Motion is one of the weirdest games I've ever seen, but that was no deterrent to instant addiction on my part. The idea is utterly simple, but with just a few strands of elastic and the odd obstacle it becomes completely aggravating - and incredibly addictive.

Phil and I were completely hooked by this one and played it for ages, getting surprisingly far. The Amiga game is obviously the best presented; the HAM backgrounds are attractive while all the objects are well drawn and move very smoothly.

The C64 version is initially rather disappointing, looking distinctly Spectrum-esque. However, to have any more colours would make things far too slow, so I'm thankful US Gold have done it this way, preserving most of the excellent gameplay. A tiny bit sluggish perhaps, but great fun all the same.

Presentation 90%
Same as the Amiga.

Graphics 87%
Simple but with realistic movement.

Sound 80%
A variety of good FX and a nice jazzy title tune.

Hookability 90%
Easy to learn, hard to master and extremely addictive.

Lastability 88%
Fifty levels can cause frustration so the save and continue-play options are invaluable.

Overall 89%
Addictive and frustrating: you'll love and hate it!

The Amiga game is obviously the best presented; the HAM backgrounds are attractive while all the objects are well drawn and move very smoothly.