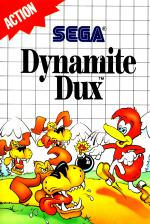 Bin, the unlikely hero of Dynamite Dux, is cheesed off for two reasons. One: his girlfriend, Lucy, has been kidnapped by the wicked goblin Achacha. Two: he has been turned into a fluffy blule duck who bears a remarkable resemblance to Woody Woodpecker.

The only way to rectify the situation is to stonk over to Achacha's abode, rescue Lucy and then gently persuade the evil one to change Bin back into human form by kicking his head in.

This involves negotiating five horizontally scrolling worlds: Down Town, Japan, Chicago, Texas and Achacha World. Each of these is packed with Achacha's weird and wonderful army, which includes bouncing dog heads, ninja moles and living flames which spit out smaller fires at Bin.

Bin has certainly got his work cut out, but is a pretty good fighter - one press of the Fire button lets rip with a punch that kills a baddie stone dead. If the Fire button is held down longer, Bin winds up a mega-punch, his fist becoming huge as he whacks large numbers of baddies into oblivion. There are also weapons lying around which can be picked up and used against the enemy, including stones, bombs, machine-guns, bazookas and "Sparrow Missiles".

At the end of each level is a big baddie which requires lots of hits with an extra weapon before it dies, leaving the route open for Bin to progress to the next level. On the final is Achacha himself - blow him away and true love can prevail, and Bin can at last return to human form...

I loved Dynamite Dux in the arcades, and this Sega version is the spitting image, combining superb, colourful graphics and highly addictive gameplay to give one of the best Sega games around. The only thing missing is the simultaneous two-player option, but it doesn't really matter when the game is as much fun as this.

Beautifully-drawn sprites, great backdrops and addictive gameplay all come together to make a brilliant Sega game which will appeal to beat-'em-up and shoot-'em-up fans alike.

Beautifully-drawn sprites, great backdrops and addictive gameplay all come together to make a brilliant Sega game which will appeal to beat-'em-up and shoot-'em-up fans alike.