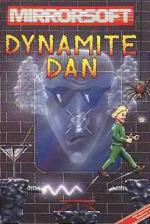 Every now and then, I get a bit fed up of the endless stream of remarkably similar games that is flooding into the software market these days. But then again, every now and then a game comes along that wakes me up and puts a little bit of sparkle into the old keyboard.

Dynamite Dan is one of those games that, whilst not being terribly original or state-of-the-art, seems fresh enough to draw you back to your machine for the sheer fun of playing.

'Dan' is, quite simply, a superior platform game. There's not an original body in his body, but what the game lacks in originality it makes up for in sheer action. Your hero Dan has landed on the roof of Dr Blitzen's castle stronghold, and now has to seek out the plans for the mad doctor's secret weapon. These plans are locked in a safe, and as well as finding the safe, you have to guide Dan around the castle in search of eight sticks of dynamite needed to open the safe, and also collect the food he needs to keep himself going.

What distinguishes this from all the other platform games around is the sheer amount of action crammed into each screen. I've never seen so many platforms, ledges, obstacles and sprites before - the sheer variety of all these things means that you have to stop and look at each new screen for a while, just to work out what you want to collect and which route to take.

Quite sensibly, you begin the game with eight lives, and you'll need all of them to work your way through the complex of rooms. But, though I found myself getting killed all over the place, I never become frustrated with the game, but instead found that each room made me more curious to continue into the depths of the castle to see what awaits in the final stages of the game.

The graphics are all well designed, and though they aren't particularly spectacular, what is impressive is the way that so many features have been squeezed into the rooms without seeming squashed or crowded. Despite all the objects in each room, the graphics are still quite large and very finely detailed and very professional throughout.

My only doubt is that, despite being an exceptionally good platform game, this type of game is now so common that prices ought to be a bit lower. Dynamite Dan is good value for money, but to get full marks on that count it could still come down in price by just a few pennies.