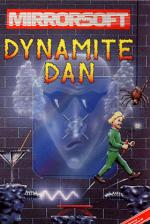 Another platform game wends its way to the Commodore, courtesy of the Spectrum. Dynamite Dan is the name of the game and also (not surprisingly) that of the main character.

Dan is having some problems with his love life. You see, the evil and wicked Professor has captured his girlfriend and has locked her away inside the safe in his mansion -- the despicable cad! Our hero, being no mug and a brave and honourable gentleman at heart, decides to set about freeing his unfortunate lady friend. So, without further ado, he hoards his airship and zooms off as fast as he can to the Professor's mansion, where he lands on the roof.

It is here that you take over Dan's actions. Starting from the rooftop base, Dan has to penetrate the mansion, find the dynamite scattered around and blow open the safe. However, the Professor's little abode is far from empty - in fact it's filled with 'orrible minions roaming freely about the place. As they're not exactly out for Dan's blood, they follow a preset patrol pattern that needs to be learnt if they are to be avoided. If Dan does make the mistake of actually touching them, he loses one of his ten lives. Falling from a high ledge doesn't do him much good either. Dan can survive quite a reasonable drop, but if he falls too far then the 'Whee Splat Gently' principle comes into effect.

The mansion is presented Jet Set Willy-style: i.e. the screens connect realistically and logically to form rooms. These rooms are full of platforms, hazards, stairs and all sorts of unpleasant little traps to catch out an unwary Dan. As evil professors' abodes go, this one is a cut above the average residence and contains some interesting features. Firstly, there are trampolines on which Dan can bounce. They work in a similar manner to the real thing and bouncing on them long enough will practically send Dan through the roof. Tele-transporters whisk Dan off to another part of the mansion if he stands underneath a flashing one. A lift travels up and down a shaft in the centre of the mansion and proves a handy means of travel, as it stops on all floors. Also it is devoid of nasties, offering the opportunity to look at a few of the rooms to either side.

Deep beneath the mansion floor there runs a subterranean river and on this floats a raft, going round and round on the circular current (all the screens wrap round into a cylinder). By simply hopping on at the right moment, Dan can get a free ride to wherever the raft is bound.

Dan is hyperactive and consumes a fair amount of energy walking and leaping about the mansion. This energy is shown on screen as a bar that slowly diminishes throughout the game. If it reaches zero then a life is lost and the bar is replenished. In order to keep energy up, Dan has to eat. Luckily, there are some tasty snacks lying around for the taking - all Dan has to do is run into them. Other pieces of booty scattered throughout the place give bonus points if taken. Some weapons and objects give temporary immunity - as long as the border flashes Dan can run into anything without fear of losing a life. This is useful for some of the more difficult screens. Extra lives can be obtained by picking up one of the few test tubes occasionally found.

If Dan manages to pick up all of the dynamite and eventually blow open the safe, he flies off into the sunset with his loved one in true Cecil B. de Mills and Boon style. Ah!

When this game first appeared on the Spectrum, everyone in Crash went ape - and personally I couldn't blame them. Dynamite Dan is a superlative JSW-style arcade adventure - colourful, fun and great to play. It has been converted very faithfully to the 64 and consequently hasn't lost any of its original charm and humour. The sound is a bit disappointing though, especially as the Spectrum version contains some almost unbelievable music. The graphics are bright, colourful and, on most occasions, well animated. DD has plenty of new, novel content and should bring even the most lethargic of platformites back to their joysticks (or keyboards for that matter)!

I've only ever seen and heard Dynamite Dan on the Spectrum a couple of times, and always thought that the graphics and music were quite smart (especially the latter). The game, I must confess, didn't look particularly outstanding to play and it wasn't until I played this conversion that my opinion changed somewhat - the graphics and sound aren't as good (I am quite miffed that the music is worse on this C64 version), but the gameplay most certainly is - better than I thought. There are some very nice touches throughout, although the basic gameplay isn't anything out of the ordinary. A slightly unusual platform game, and something for addicts of the genre to chew on.

Though enjoying this game greatly on the Spectrum, I'm not as impressed with this Commodore version. The graphics are the same as those of the original and very impressive they are too. But, and I know it may seem hard to believe, the sound on the Spectrum version is better! Dynamite Dan is as similar to play as any other platform game, although there are some nice aspects, even original ones, that are very effective. The trampolines and underground river are just two of many such ideas. The price is reasonable but all in all this is really lust another platform game with a few nice touches. But then if you like that sort of thing...

Sound 62%
Above average tunes and FX.

Value For Money 83%
Cheaper and better than a lot of Commodore software.

Overall 80%
One of this year's more impressive platform games.

Attractive, colourful backdrops and sprites make this one of this year's more impressive platform games.