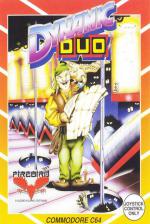 Walking round a castle accompanied by a bird? Sounds like an invitation no sane man could resist - that's why Chris 'In Two Minds' Hayward flatly refused.

Batman and Robin, Crockett and Tubbs, Hudson and Halls - terrible twosomes are always popular (apart from Hudson and Halls, who are just terrible), and in this two player outing the lead players are a dwarf and a bird. The bizarre couple like to rendezvous at weekends and meander around a castle gathering treasure and shooting horrible creatures that might hinder their fun. They can walk round by themselves (which is where the split screen comes into action) or team up, a map of the castle taking over the lower screen.

Now the plot's out of the way (incidentally, that was the extended version) the critical onslaught can begin. Two player escapades usually provide a laugh no matter how disgusting the gameplay, but all Dynamic Duo deserves is pitiful sorrow. The Dwarf resembles a stumpy Santa Claus, dawdling around like a sedated limpet. The flying duck zooms straight into oncoming nestles (if you can call green hoops nasty) with its firepower proving as much use as a rhododendron, The most atrocious aspect is revealed when a player dies. At first I thought the program had crashed: the screen intertwined with black and white lines flickering across, trying to represent some kind of thermal meltdown. Believe me, thermal pants hold more appeal. Who on earth had the idea that a dwarf and a duck would make a formidable team? Dynamic Duo indeed - it's a creeping mass of tripe and tangerines.

Dynamic Duo indeed! It's a creeping mass of tripe and tangerines.