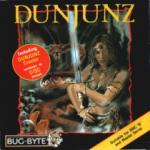 BBC owners are usually considered fairly serious people who wouldn't dream of venturing near an arcade. Yet they'd have to be pretty unworldly not to have heard of the mega-hit Gauntlet that's taken the arcade world by storm. Now being rapidly converted for the Spectrums of this world, it might be thought that a four-player arcade adventure would be beyond the poor old Beeb's memory!

Not so, as Bug Byte prove with this cut-down version of the game. Up to four players on the keyboard (can get crowded!) have to venture deeper and deeper into a dungeon, killing monsters, collecting treasure, co-operating and seeking the best and most profitable route.

The screen is divided into five areas: a general scoreboard to the right where scores are kept and a square of four smaller screens. Each of these belongs to one of the characters/players and they scroll individually with that character centre-screen. Thus you can move of on your own whilst still keeping an eye on the other characters.

That's important too - although collecting treasure can be fun, successful completion of the game will be much easier if the players co-operate. There's bound to be a lot of publicity about the Gauntlet variants on other machines and some fairly unpleasant crowing about accuracy of graphics, etc. What this game proves is that even without pure accuracy or dazzling graphics, it is possible to produce a very playable game that will provide a lot of pleasure.

Forget the sexist advertising and descent, courage in both hands, into the depths of the Dunjunz - you won't regret it!

What this game proves is that even without pure accuracy or dazzling graphics, it is possible to produce a very playable game that will provide a lot of pleasure.