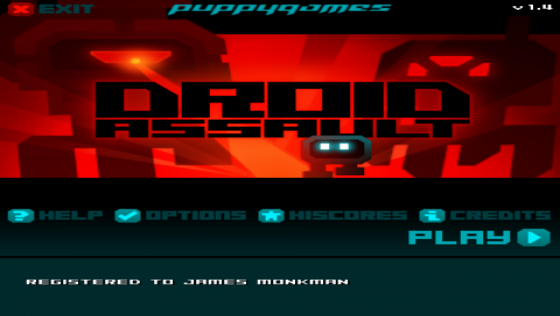 With its winning combination of glowy neon graphics, classic game-play lifted straight from Andrew Braybrook's Paradoid and a healthy dose of new-school frenetic arena combat, Droid Assault has proven itself to be one of the best commercial indie titles of 2008.

First there was a game called Paradroid, a classic C64 release coded by Andrew Braybrook back in the mid 80's that successfully combined elements of strategy and logic into a top-down perspective run-n-gun maze shooter. Later came the vastly improved 16-Bit Paradroid 90, with upgraded presentation, greater depth and an unsurpassed challenge for the player with its wider array of enemy units and ships to recapture. And now PuppyGames have stepped forward to provide us with an unofficial evolution of the robots running amok in a 2D maze concept; it may not carry the Paradroid name, but there really is no denying the fact that Droid Assault is clearly and directly inspired by Graftgold's opus.

In many ways, this is a good thing. PuppyGames have cherry-picked the best bits from Paradroid (i.e. classic 2D shoot-em up combat and ability to transfer into other shells), dropped the logical transfer mini-game to make the game more accessible (the transfer circuits were always a pain in the arse for new players) and have added scores of new features, including the ability to build up a squad of your own AI controlled droids and some seriously hardcore boss battles. PuppyGames have retained their established low-res glowing-neon graphical style as used in their previous releases, but unlike Ultratron and Titan Attacks (which are both great arcade titles in their own right), Droid Assault's difficulty level has ensured that it won't be classed as a casual game; in fact, completing it will require similar levels of dedication, determination and skill to that required to beat the original Paradroid.

Played via the keyboard and mouse, your goal is to guide your initially defenceless robot into the labyrinthine complex of the Omni-Corp factory and to take control of (or destroy) all the robots within the 50 unique levels. The factory environment is rich with detail, with destructible crates, computer banks, defence systems and lighting placed believingly and strategically throughout the levels - it's a huge improvement over the bas-relief visuals of the original Paradroid and the nonsensical level designs of Paradroid 90's pinky-yellow space dreadnoughts. The attributes of the 48 different droids vary hugely and genuinely affect game-play; the incompetence of the low-level robot AI and outdated weaponry results in the player constantly being on the lookout for new recruits to defeat Omni-Corp's ever-increasingly well-armed and armoured defence droids. In contrast, the extensive series of collectable power-ups often works against the temptation to amass an army of bigger and better machines, causing the player to become quite attached to their gang of little robots (I for one always find it genuinely upsetting when one of my early yet fearsomely-upgraded droids bites the dust). As already mentioned, the often-frustrating logical transfer mini-game hasn't been replicated in Droid Assault; instead the player earns a transfer point after every 1000 traditional points scored. The more powerful the enemy droid, the greater number of transfer points are required to capture it - and the necessity of earning score points to do so means that the game is far more balanced between shooting and capturing than the original Paradroid series (in which a skilled transfer-player could win the game without firing at a single robot). 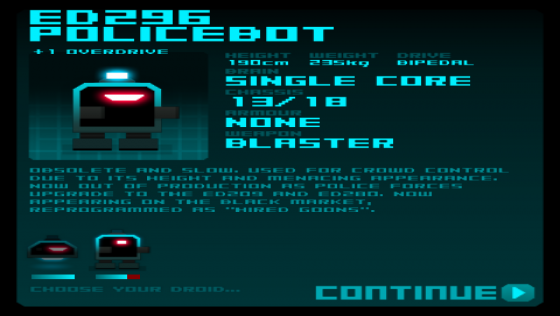 The standard hunt-and-destroy levels are broken up by the occasional (and appropriately named) 'Danger' stages, during which you'll find your collection of droids efficiently culled in an open arena by enemy robots rushing at you from all sides. Then of course there are the epic boss battles where you'll have to duke it out in classic David vs Goliath style against robots that are superior in size, shields and blammo-gun firing capacity - there's no easy option of droid transferring here. Thankfully the responsive control system works intuitively, with the mouse used to aim your crosshair (for firing and selecting units to capture) and WASD or Cursor keys for movement, meaning that it's easy to duck in and out of cover whilst firing simultaneously in another direction. Another nice feature that I discovered by accident during play is that you can use the mouse wheel to quickly jump between your own units (contrary to the usual transfer method of manually selecting a droid with the crosshair) - but unfortunately this leads me on to the only niggle I have with Droid Assault; the practically non-existent documentation.

In all, Droid Assault is a truly impressive arcade blaster and a worthy tribute and homage to the original work of Andrew Braybrook. PuppyGames have clearly put a huge amount of effort into creating such a well designed and balanced game, and it's a shame to see it let down by a distinct lack of documentation other than a basic in-game 'help' screen. There's no back-story or plot other than a few brief sentences given on the game's website, and the lack of droid and power-up descriptions (or even a comprehensive control guide) means that player is simply left to work it out for themselves. One of the truly awesome things about Paradroid 90 was the ability to log into each ship's computer system and view deck layouts and technical descriptions of the droids within via a sort of electronic encyclopaedia, and it's my opinion that if a similar system had been integrated in Droid Assault the game would have been dramatically enriched with increased depth and a sense of interactivity, as well as enabling the player to strategise via maps and identify which droids they should concentrate on blasting, and which they should capture instead. Failing this, some sort of web-based droid/power-up encyclopaedia or included documentation would have been greatly appreciated, especially as Droid Assault carries a price tag of slightly over £10.

Not wanting to end the review on a downer, there have been several updates to the game since release and as with their other titles the support provided by PuppyGames is impeccable. Although the game has always featured a quick-exit save system so you can continue a game where you left off, version 1.2 saw the implementation of a handy (and frequently requested) level unlocking system, meaning that after every five levels played you unlock a quick-start position so you don't have to play through the early stages every time you start a new game. Who knows? If enough people buy Droid Assault and ask for an online or in-game info-base of droids and power-ups to be provided then maybe they'll appear in a future update? Well, perhaps that is wishful thinking, but nonetheless Droid Assault is still an excellent game that is certainly worth buying.

(Note that Droid Assault is also available for Mac OS and Linux systems).

A well designed and balanced game, let down by a distinct lack of documentation other than a basic in-game 'help' screen. 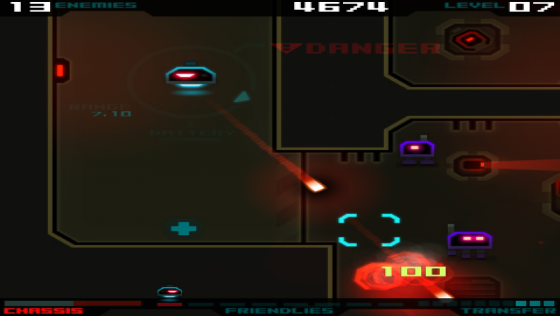 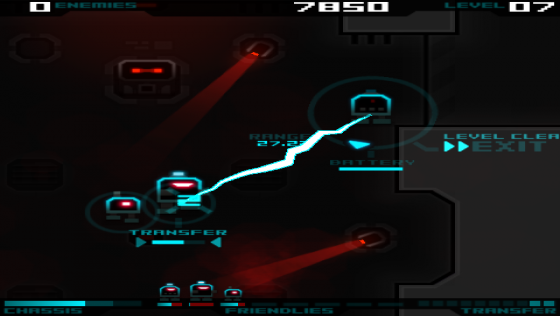 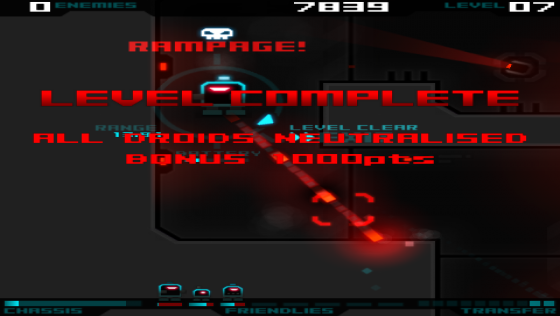 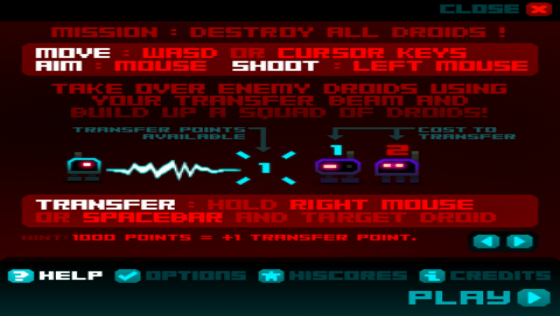 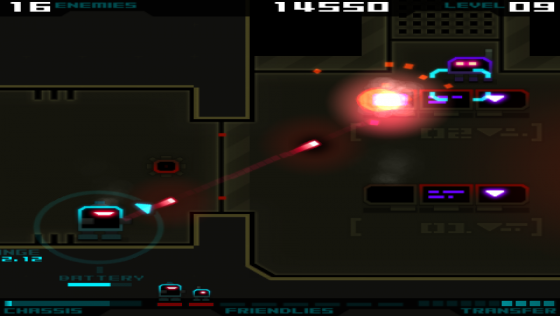