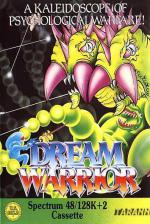 Now I've read some pretty naff plots in my time, but this one has to take the biscuit. It's probably the most contorted, contrived, badly-written piece of fiction I've ever had to wade through since reading my last school report! Still, here goes...

An evil organisation called Focus is sending Dream Demons to attack people in their sleep. Four astral scientists called Asmen (with just the one "S") find out how to combat them with pulsar neutrons, but before they can do so, three of them are captured by Ocular, the greatest dream demon of them all. You are the one who isn't of course, and now you've got to reclaim the other three.

But let's play along: to rescue your chums you'll have to get into their dreams using the dream hopper, which is charged up with hopper energy. This is collected by shooting demi-demons, which flit around the place, obviously trying to hitch a lift back to Manic Miner.

Other demons give you bits of the scientists' Psychic Images, which need to be collected to complete the game. The remaining ones give you credit cards which can be swopped for increased Sleep Depth (oh yeah, run out of thisd and the game's over) of lift-passes to move between levels.

To be honest, after a few minutes of playing this I was quite ready to write it off as a no-hoper. I'd even got a great selection of dismissive phrases lined up for it. But (sniff) you'll have to wait for the next offender that comes my way, 'cos after a while Dream Warrior really began to grow on me.

If it's action you're after, Dream Warrior is hardly going to get the adrenaline pumping, but it plods along at its own pace and for those who are prepared to accept its little idiosyncracies, it should give plenty of hours per pound.

If only I could work out why US Gold keep putting words in capital letters for no APPARENT reason in THE middle OF the instructions. P'raps it's GOT a sticky caps-lock KEY?