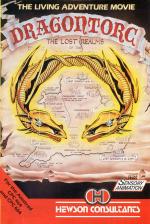 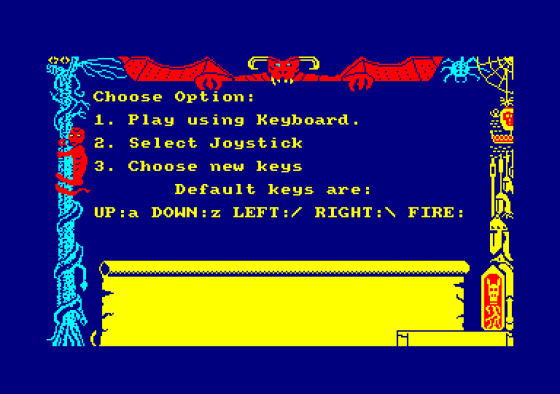 Like Dun Darach, this has been called an adventure movie because it combines the puzzling of adventures with sophisticated animation and lots of locations. Its predecessor Avalon hasn't been converted for the Amstrad but this is an impressive opener for Maroc the Mage in his fight to get the five crowns of Britain. Along the way he faces constant danger, not least from his arch-enemy Morag the Shapeshifter.

The game is composed of many locations which vary from forests to vaults but all take the same basic format. This is a 3D perspective with you viewing through one 'wall' and two others tapering to join a third at the back. In these three sections appear the exits to other screens in the form of doors or forest tracks. Maroc never actually moves but you control a projection of him (perhaps that's why it flickers) with which all the tasks have to be completed.

You can only travel around using a move spell which causes you to hover just off the ground giving you control in all directions. You can now get from place to place by moving 'into' a pathway or bumping a door open and then passing through it. 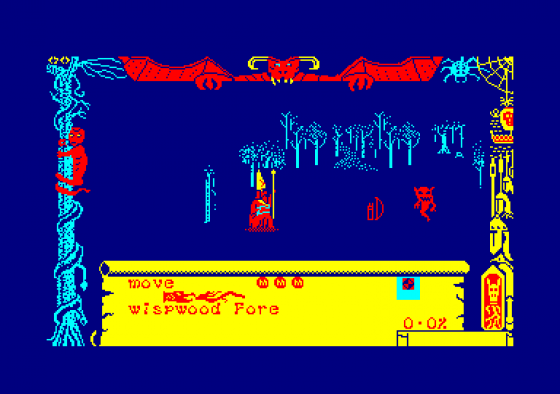 On your travels you encounter many strange beasts and lots of objects. All of the characters are supposed to have sensory animation' but this merely means that they react differently to you depending on what you do to them. The first things you'll encounter are elves and wisps, the former being timid but prepared to trade and the latter being much more hostile.

Many of the inhabitants and static objects will drain Maroc's energy, which is represented by a flame in the status screen at the bottom of the screen. This screen also displays the spells that you can pick up and use. These are on a vertically scrolling menu and every time you gain a new magic power the spell appears on the list. To inform you of your acquisition the eyes of a demon at the top of the screen flash. Be careful, though, since some spells can only be used a limited number of times.

Objects can be picked up and activated by using Maroc or his faithful spirit-like servant. Maroc just has to pass over something to pick it up and if it's a spell he can then activate it. Non-magical items need to be used by the servant who can take things out of Maroc's backpack and use, drop or swap them.

If you have too many run-ins with the nasties and exhaust your energy you're returned to the starting position (or the entrance to an area if you've completed the first section) with all your possessions dropped where you died. Energy can be replenished either with a spell or by using the mystical leylines. These are pathways that Maroc has to fly down Pole Position-style meeting energy-providing or energy-sapping objects on the way.

Once you've got the hang of getting around you can start investigating the many problems that have to be solved. There are over 250 locations and most contain something of interest. You're bound to have difficulties cracking sections of the game but the instructions contain some handy hints and the general style of solutions soon becomes familiar.

In Wispwood, your starting location, the main aim is to find the Leyrod which is concealed below in the vaults of Locris. With this you can reveal leycubes at stone circles and travel to several other areas. Early on it is worth searching everything with the servant since he can trade with elves, recover a gem from the pool and move stone slabs with Merlyn's seal.

All problems work in a sort of progression so that you'll need one object to get another and so on. These will eventually lead to the crowns and Merlyn. One general tip is to be logical - i.e. keys open chests and doors, runes and symbols may fit into or onto things, and containers, like the chalice, are for carrying and depositing things.

There's such a strong adventure element in this game that those in search of more rapid gratification could find themselves asking questions like 'What on earth am I supposed to do?' followed by 'And how am I supposed to do it?' But it's worth persevering. The graphics, despite that flicker, are very imaginative, the puzzles are intriguing and the whole thing will keep you going through many a long winter night.

P. Over 250 atmospheric locations.
P. Impressive 3D effect as you move around.
P. Many complicated tasks to complete.
P. Lots of other characters to interact with.
P. Plenty of imagination in the problems, scenario and spells.
P. Very rewarding when yon crack a problem - a real adventure.

N. Graphics can be quite flickery.
N. Navigating through doorways can get frustrating.
N. No quick rewards - you'll have to really work at it.

The graphics, despite flicker, are very imaginative, the puzzles are intriguing and the whole thing will keep you going through many a long winter night. 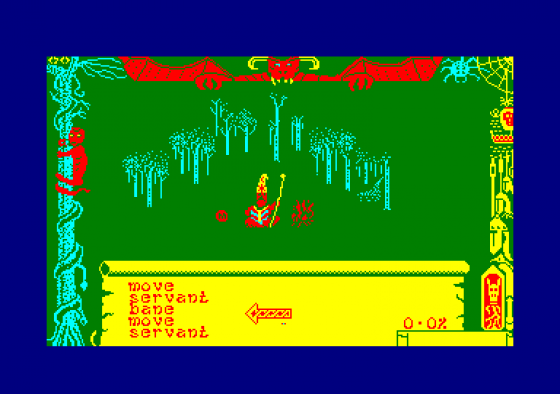