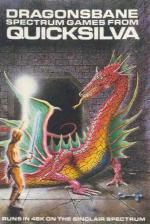 This game is best described as Adventure by Multiple Choice. Your best choice is to steer well clear.

The scenario is familiar. You're wandering through the halls of a monster-infested castle in a bid to rescue Princess Paula.

You're shown a picture of each hall (all almost identical), together with a monster if one is present.

There is no movement, no arcade action. And unlike a text adventure you cannot suggest your own course of action. Instead, you are presented with a set number of choices, e.g. fight or run.

Fighting will result in a written running commentary appearing which details the fight's progress and may end with the monster's death or you feeling very weak. The trouble with this kind of program is that it is completely devoid of atmosphere and variety. The choices forced upon you reduce the adventure to a banal affair more in keeping with a Chemistry O-level.

Best described as Adventure by Multiple Choice. Your best choice is to steer well clear.