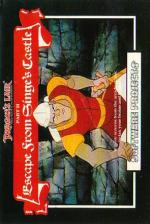 Two games from Software Projects within the last six months, that must be a record. Mind you, Escape From Singe's Castle isn't a completely original title as it's the follow-up to that recent hit conversion, Dragon's Lair. The original coin-op game was too complex to fit into the confines of a little home micro, so Software Projects split the game into two halves (and presumably, got two games out of one licensing deal).

Having rescued Princess Daphne and despatched the dragon last time around, your character, Dirk the Daring, has returned to the castle which is now controlled by the old Lizard King, in an attempt to find the pot of gold hidden in the depths of the dungeons. But, as in the previous game you have to guide Dirk past a number of deadly obstacles in order to reach your goal and then escape to safety.

I have to admit that after all the hubbub died down, I was a bit disappointed in Dragon's Lair, mainly because I found it so hard to play that I simply couldn't get any distance into the game. I eventually gave up because I got bored with always dying on the first or second screens. Part II, however, proved to be a bit easier to play.

The challenges that Dirk has to face in this game include Ye Whirlpools and Ye Rapids, ye amazing Magical Flying Horse, ye olde Mud Monster, and of course the old Lizard King.

I could be wrong but it looks like they're improved the graphics a bit for this game as well. I remember Dirk the Daring looking like Dirk the Smudgy Black Blob in the last game, but here there's a bit more detail in both his figure and in some sort of the location graphics.

Controlling Dirk is a relatively simple matter. Depending on which screen you're on, you use a combination of up/down, left/right, fire/jump to perform the required actions. I wasn't that keen on the joystick control, but using the keyboard was quite simple since this isn't the sort of game where you need 100 fingers to handle the controls.

Dragon's Lair was an innovation in coin-op games because of the way it used a laser disc to store the cartoon-style graphics. But the drawback to this system was that the options available to you were limited because of the vast amount of memory taken up by the high quality graphics. This meant that, at times, getting past on obstacle was simply a matter of trial and error rather than real skill, and once you'd worked out the correct sequence of moves there wasn't that much left for you to do. However, at its best moments the game also allowed you a bit more scope to approach the obstacles in your own way, and this is where the conversion of Lair II seems to have improved over the first attempt. Perhaps Software Projects saved all the best for this game, or maybe I'm just getting mellow in my old age, but it certainly seems like there's more game to play here. Essentially, you're still limited to making the right move at the right time, but the feel of the game has improved, and i felt a bit more involved with this game than I did with Lair 1 as there's a random element in some of the screens that makes you feel you're in control of events instead of just following a fixed sequence.

So, if you're feeling brave and in the mood for a spot of derring do, load up Escape From Single's Castle (and count yourself lucky that the Spectrum version doesn't cost 20p a go).

Allows you a bit more scope to approach the obstacles in your own way, and this is where the conversion of Lair II seems to have improved over the first attempt.