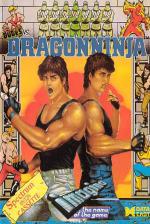 George Bush has been kidnapped by a gang of belligerent ninjas!!! And you, unfortunately, are the one who's picked to go and rescue him. So arm yourself to the teeth with nunchakus and prepare to face up to the seven levels of ninjas ahead of you.

Set in the streets of some American city, Dragon Ninja has you battling through streets, sewers and forests balancing on top of swaying trucks and trains, all in order to reach the Pres. The screen is split into two levels, and you can change between the two quite easily. Very handy for ninja-dodging.

At the end of each level you will meet a mega baddy who takes a little longer to duff up, but if you keep hitting him and running away, you can escape virtually unharmed. The nasty ninjas include a Karnov lookalike with curry on his breath, a manic robot who keeps jumping up and down before you get the chance to hit him, and a ninja who has an irritating habit of suddenly multiplying into an army, and who proceeds to hit you so fast and furious you hardly get a chance to hit it back. There is also a somersaulting giant who keeps clapping with your head between his hands, and a stick weilding Lobin Hood. Last, but by no means least there is an axeman intent on lopping your head off... and leaving you wandering around like a dead chicken.

On your travels around picturesque New York you will find the odd object dropped by your enemies when you kill them. These include a boxy thing for energy, a little clock for time and a funny looking fork which gives you a better reach and the ability to kill a few ninjas in one blow (a very useful object indeed).

As you go through the game it gets progressively harder, with the addition of the odd rabid dog from level four onwards.

A game with such potential unfortunately falls short of being addictive. The first three levels are ridiculously easy and I'm afraid the rest of the game doesn't get much harder. It looks great but a well qualified ninja gamester will probably finish this game the day before they buy it.

Dragon Ninja is an interesting game and the graphics (except the loading screen) are well thought out, but I would only recommend this game to anyone sick enough to want to rescue George Bush.

Pretty kick-'em-up that doesn't quite fulfil its promise.

Dragon Ninja is an interesting game and the graphics are well thought-out, but I would only recommend this game to anyone sick enough to want to rescue George Bush.