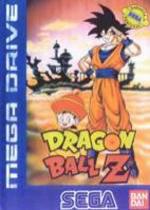 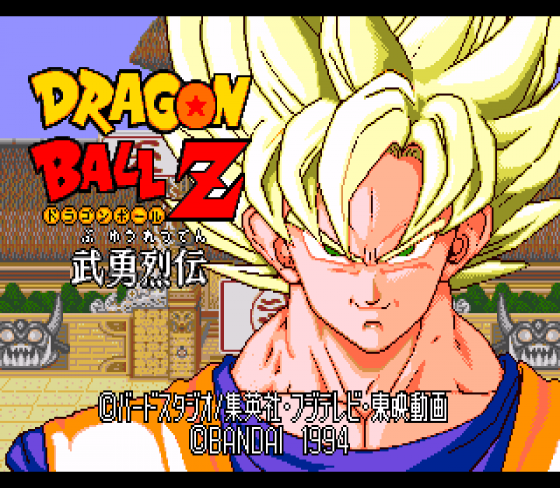 In Japan, comic series of the likes of Dragonball Z are immensely popular wth children and adults alike. The volume of material pushed out on sagas lke 3*3 Eyes and Ranma might seem huge to us, and the lurid-coloured paperback back-to-front format of the editions, stacked in their thousands in Japanese bookstops are far removed from our Dillons and Waterstones with their glossy seasonal novels and hardbacks.

But the Japanese go one step further and turn their literary creations into digital forms. Dragonball Z is just the latest. The exploits of Goku and the Super Saya people of Vegita in their struggle against Friza and his robot cohorts have been distilled into a one-on-one beat-'em-up. Before you groan, it's an idea not totally lacking in originality...

Dragonball Z comes from Japan, where it is a successful comic book and toy format. 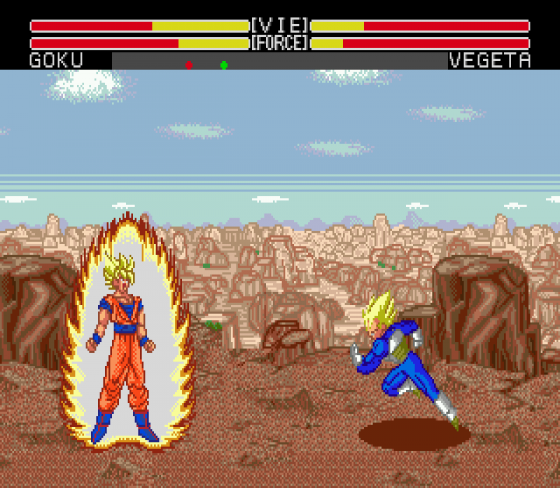 Defeat opponents in the one-on-one beat-'em-up style, by knocking the energy out of them.

Each player has two bars. The top one shows energy level, consistent with most beat-'em-ups. The bar underneath signifies the power level of each fighter. This creeps up during a boat, but may be boosted by the players performing a move which envelops them in mental energy. When suitably powered-up, fighters can perform immense special moves which rocket across the screen as huge beams of energy, doing massive damage.

The fighting arena in Dragonball Z covers a larger area than other games. Freedom of movement is possible by the screen splitting. As the players separate, a vertical division appears. Also, when one player takes to the air, using his levitation powers, a horizontal divide splits the playing area. 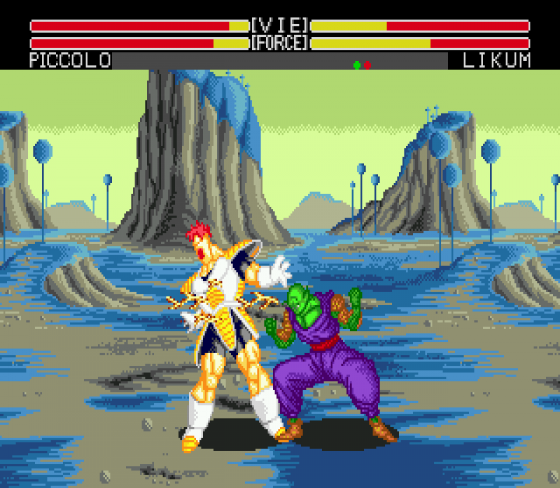 The secrets of the squiggles revealed! The essential guide to the characters of Dragonball Z and their foibles:

Apart from the screen split, Dragonball Z is set apart with its range of moves. Each player has around eight to nine specials, covering all sorts of conventional combat manoeuvres and plenty of 'fantasy' moves. Many of these require fiddling of the joypad, in Streetfighter vein.

It is slightly amusing to find Dragonball Z programmed by Bandai, a Japanese toy company who have always had an association with Nintendo. Indeed, until 1993, Bandai were the licensed distributors for Mario's wares in the UK and would have blanched at the thought of a Megadrive game. 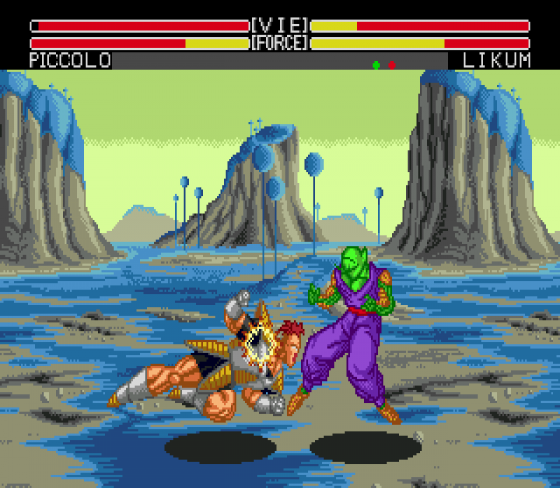 At first the word 'poxy' springs to mind, but behind a rather shambolic exterior, Dragonball Z is rather fun. Firstly, it has a different feel to most one-on-one shoot-'em-ups. The larger playing area allows you to draw back and decide tactics before going on for close contact, and many of the special attacks are long range.

And there are many special attacks, including the amusingly over the top energy beams. The visuals are a bit jerky, and the character animation isn't state of the art, and yes, the split-screen is sometimes more confusing than helpful, but whether by accident or design, the programmers seem to have got the playability just right.

At the price it's a luxury, but don't be afraid to indulge. 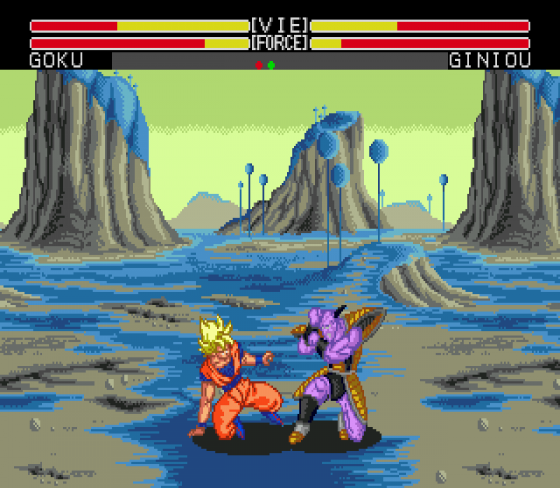 Not being a huge fan of beat-'em-ups, it was with reluctance that I agreed to do the comment for Dragonball Z and, like Gus, my first impressions were that my reticence was justified.

The graphics are far from stunning, the controls dodgy until you're used to them and it appeared far too slow to be any fun. However, once I got into it, I found it wasnt just another Streetfighter II clone and actually had an enormous depth to it with its plethora of special moves, fighting styles and unusually large playing area. Dragonball Z really does offer a new slant.

Graphics 74%
P. The first Megadrive beat-'em-up to split the main window.
N. Some of the sprites and backgrounds look plaintive.

Sound 83%
P. Poppy energetic soundtracks which drive the game along. Great sound effects.
N. Not much variety to be found in the music.

Playability 84%
P. There's a huge range of moves, some of them quite satisfying to perform. A very tactical beat-'em-up
N. The jerky performance gives it an amateurish feel.

Value For Money 73%
N. The £60+ price tag is discouraging for a game that, at its heart, is an imitation of many others.

Overall 81%
Intriguing, quirky, enjoyable and off-beat. Dragonball Z is for those who like their beat-'em-ups unusual (if that is possible).

Like your beat-'em-ups unusual? Dragonball Z is intriguing, quirky, enjoyable and off-beat. 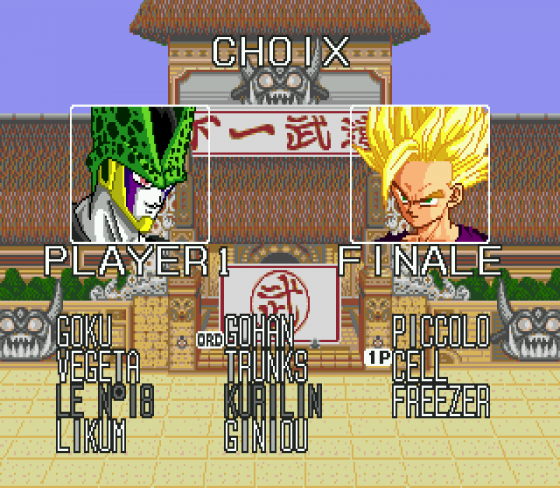 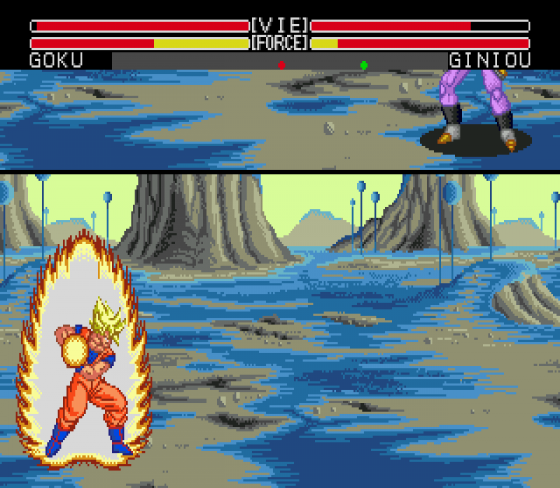 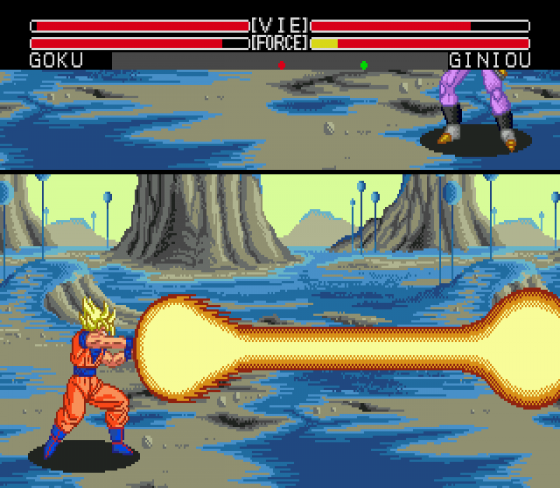 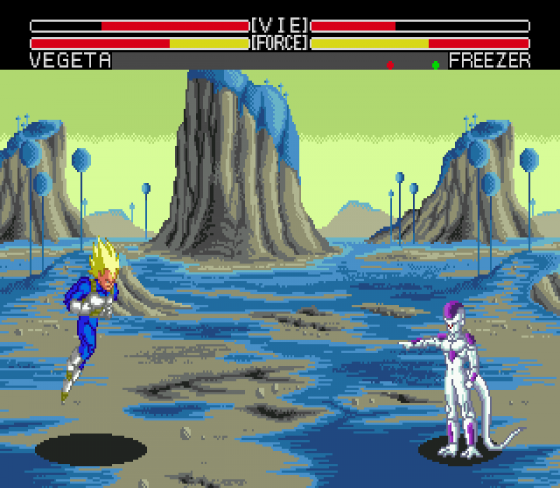 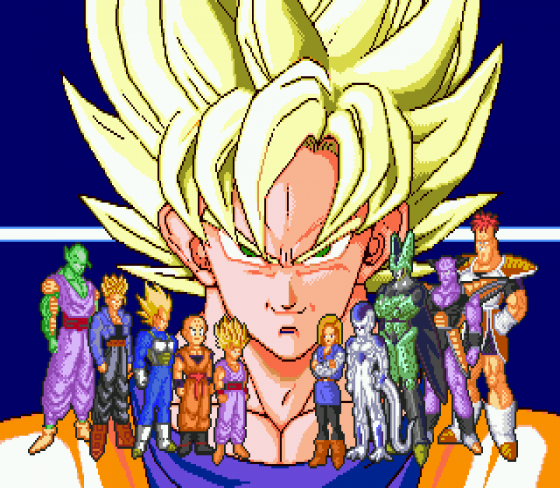