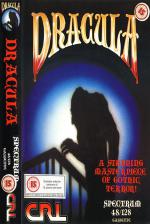 Gordon Hamlett gets his teeth into this fiendish game from CRL and sees whether they have scored a ghoul.

After all the fuss and ballyhoo about Dracula being the first game to get a rating from the film censors, and together with radio interviews and newspaper articles, the actual game has tended to become lost of the accompanying wave of publicity. Which is a pity, because it is actually a very good adventure.

The first thing that is likely to fox players is that Dracula sticks very closely to the original book by Bram Stoker. So, all those hints and tips that you have picked up by watching late night Hammer Horror movies are not going to help you very much! The story is based on a medieval Easter European character known as Vlad the Impaler. He lived in Transylvania (modern day Romania) in the early fifteenth century and is rumoured to have been living ever since, for, as everybody surely knows by now, vampires belong to the undead.

Beware should you meet a passing Romanian though, for they do not like the connection between Vlad and vampirism and you could find him becoming a pain in the neck. Literally!

The game comes in three parts. Part one sees you, Jonathan Harker, a young solicitor, travelling to Transylvania in order to meet Count Dracula. You have purchased a house in Britain on his behalf and are taking him the details. There is also some mention in your client's brief of importing some soil into Britain in order that he can be reminded of his Transylvanian roots. Your coach drops you at the Golden Krone inn where you are to spend your last night before transferring to Dracula's castle.

After signing the register, you quickly find that the hotel consists of little more than your room and a place to eat. After a good meal, it's off to bed, just in time for a nice nightmare.

You wake, desperate for water but unless you have taken the correct precautions, all you are likely to get is an extra portion of stake - something that you don't recall seeing on the menu earlier in the evening.

Should you survive the night, you find that a coach arrives to whisk you straight off into part two, which deals with your journey to the castle and your stay there.

The only other occupant of this coach is a little old lady who, though she will smile at you, has little to say for herself. There is something about her face though that draws you to her, and you find yourself in a hypnotic trance.

Survive that encounter and she gives you a cross, which will help you although not in the way usually associated with Dracula films. As you transfer coaches yet again, try showing the cross to the dark, cloaked coachman. Especially if you enjoy being beaten up.

The weather is now getting very cold and, if you don't freeze to death, you arrive at the castle, you feel that you ought to be able to gain access, but you can't quite put your finger on it. Eventually, Dracula shows you to your room.

You are tired and dirty and desperate for a shave, but unless you can find a mirror (Remember that vampires have no reflections!) you'll soon be out for the Count. By this time, you have realised that there is something amiss (perceptive chap, that Harker) and the rest of part two is concerned with your escape from the castle. Will you find the secret passage or will you smell a rat before they smell you?

Part three sees a shift in scene. You now take on the role of Doctor Seward, a psychiatrist running a lunatic asylum. You receive a disturbing letter from your friend Harker who improves you to find fifty boxes of soil and prevent their use by the undead.

This seems to tie in with a newspaper report of a Russian freighter that has sunk off Whitby Bay and which just happened to be carrying a load of soil as part of its cargo.

To add to your problems, one of your patients has escaped again. Renfield is a man who believes that, if you eat a spider, you gain its strength. Certainly something has affected him as you find out to your cost if you stay out when it is dark.

This is the part of the story that very few people know about. The bulk of the book is set in Britain, not in Transylvania. Hollywood set about persuading people otherwise.

Any horror story stands or falls on its ability to impart terror into the mind of the reader and the game's author, Rod Pike, has done an excellent job with Dracula. Signs of his love of horrific scenarios were much in evidence in his previous game, Pilgrim - a text only adventure also available from CRL, but that was only a taster of things to come. The descriptive passages in the game - and there are pages and pages of them - conjure up all sorts of images in the mind and you soon see that the 'fifteen certificate' was no mere publicity stunt.

The main horror sequences usually come when you have done something wrong and are about to die but they are so well written (although they are occasionally verbose and marred by the odd spelling and grammatical error) that it is well worth getting yourself bumped off. This is not usually too difficult a thing to do as many of the sequences have to be solved within a certain number of moves from the situation having arisen.

Frequent use of the save command should be made, the best time for this being just after you have solved a particular problem.

Because the plot follows the storyline fairly closely, the problem structure tends to be of a linear nature, i.e. everything must be done in a specific order. This can cause annoyance in two ways. First, a player can get stuck on a particular problem and not be able to progress in the game and secondly, there are those infuriating occasions where you are told that you can't do that - yet.

The game handles this very well, especially in the first two parts where the game reads like a narrative, punctuated by situations where there are problems to be solved. This idea of following and participating in a story is unusual but very well implemented and the result is a lot more convincing than say Lord Of The Rings which is more of a book within a game rather than game within a book.

Dracula also features digitised graphics although, very sensibly, they are not allowed to interfere with the text. Again, they appear usually upon your demise when the screen is cleared to be replaced by a small illustration of your face, complete with severed neck or whatever. All this to the accompaniment of a reasonable rendition of Bach's Toccata and fugue in D-minor.

The parser is a fairly simple two word, verb-noun input. Although other companies are using more and more complex command analysers, I suspect that most adventurers still use the traditional inputs wherever possible. The vocabulary used in Dracula is straightforward and I have not yet encountered any strange or illogical phrases.

When you first enter a location, you get a brief description of your surroundings. The command "look around" frequently gives further clues as to what furniture, etc is present and then these can be examined at will.

Dracula is yet another example of how good text will beat poor graphics any day of the week. The atmosphere and terror created is superbly done and really does justice to the book. Certainly one of the best adventures of the year, I think that its success will be measured by a huge boom in garlic sales.

The atmosphere and terror created is superbly done and really does justice to the book.