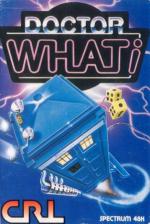 Oh No! I Why did I get this? Doctor What! I mean there is a title that says "this is going to be a fun filled game that isn't the slightest bit funny".

I think it's supposed to be a spoof of Dr Who (he said pointlessly). A spoof if you think that Trydis rather than Tardis is funny. Doubtless CRL will ship a few before the BBC's lawyers start to send them nasty letters.

Dr What is a very basic Spellbound-style game. It has object that you pick up, store and use in various unlikely ways. You, the Doctor, are a large sprite, movement looks not so much jerky, more as if rigor mortis has set in.

The plot? Well there are these four Doctors (yes, four) called ... What, When, Where and Why? Why? is the question I keep asking myself. Each Doctor has his (?) own tremendously amusing problem, although finding a key to the Trydis (usually just lying around) means you can zip off somewhere else.

To be generous there was one reasonably Okish sort of problem I came across - a cliff face to be climbed where the shape of particular rocks gave you a clue to a route up, get it wrong and you fall.

Mostly, however, the game is spent jumping up on tables and collecting objects that don't look like what the status screen says they are. If there is relatively little attribute clash it's only because of the lack of detail in most of the graphics.

Surely it should have been a budget offering - it is certainly inferior to Spellbound and yet sells for £7.95. Maybe CRL are thinking of those legal cost.

Tired variation on the Spellbound formula. Tries very hard to be funny but fails miserably. Better as budget.

Tired variation on the Spellbound formula. Tries very hard to be funny but fails miserably. Better as budget.