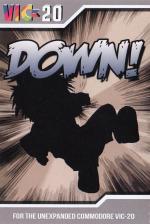 Commodore's Vic-20 had only 5K of memory, with only 3.5K of that being programmable. Whilst, once upon a time, this was seen as a limitation, it's now seen as a challenge. And to prove the little Vic capable of equally competing with its contemporaries, programmer Martijn Wenting has added a range of Vic-20 games to his website at www.revival-studios.com, which are now available as both digital downloads or physical cassettes complete with cover art and snazzy logos.

The first of these is Down, a vertically scrolling platform game in which you must navigate a robot-looking ball through gaps in the platforms. The game is rather like a very simple mobile phone application; as the game speeds up, there is less and less time to react. On some of the platforms you'll also find a bonus which you can grab for bonus points only if there is enough time.

There's no back story to this game and, frankly, there doesn't need to be. It's so simple your grandma could probably have a fair bash at it.

The second game is Rush, which is a horizontally-scrolling game which is actually pretty much the same sort of idea. Albeit Rush features a parallax (background scrolling at a different speed to the foreground) scrolling cityscape. You are in control of a bank robber jumping across the rooftops of the city by means of the joystick and fire key. Again, the objective is simply to survive as long as possible. This means timing your jumps correctly so as not to fall between the buildings. Leftover cash can also be grabbed.

Both games are written completely in assembler and, considering the miniscule amount of memory the Vic-20 has, are fairly accomplished works. With every byte being of the utmost importance, there was little room for loading screens or on-screen instructions in Vic-20 games of old, but Revival Studios has managed to include these more professional features by "shrinking" them down. Instead of a loading screen, it therefore displays a small but impressive logo of the game's title - and by redefining the character set, it manages to get its own logo and a high score feature in there too, though you may need a magnifying glass to see them!

Down has something of a stretched appearance, and the large empty blue spaces in the background don't give the game much ambiance. Despite being in exactly the same resolution, as you'll see from the screenshots, Rush clearly looks a lot better.

However, there's a big "but". Revival is currently asking £9.95 per cassette, and £3.95 per download, for Down and Rush. Put simply, unless you are a serious collector of Vic-20 titles, they're just not worth that much. After ten minutes you'll be bored by both of them.