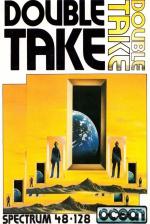 What the deuce is this, Carruthers? A game of two universes, co-existing side by side (by Sondheim). How very singular, or possibly pural. What am I talking about? Ocean's latest game, Double Take, that's simply chock full of new ideas, that's what.

You play a research assistant left to look after the hyper-important "Physical Particle Investigahon Unit" while everyone else goes down the pub. As you settle down to a cup of tea and the latest copy of YS, sumink dreadful happens in the shape of sumink from the parallel universe called Sumink. Thanks to him, the two universes momentarily collide, causing all sorts of odd effects.

Possibly the most startling is that you're transformed into a hyper-energetic lab assistants coat with a particularly bad case of the shakes. Yes, I did say a coat! Meanwhile, doors turn into whirlwinds, and aliens appear everywhere.

More importantly, it seems, objects from each universe have swopped places with each other, rendering the rooms in which they lie unstable. It's your job to change them back again.

And this is certainly no mean feat. Although you regularly cross between the universes, what you're carrying won't come with you until you've made it stable. This you do either by shooting loads of aliens or by finding the 'sparkling cloud', a sort of gleaming blob that floats around the base, looking as much like a sparkling cloud as I do Tom Cruise.

But here's where it gets complicated. Though the objects are the same in both universes, it's not their precise equivalents that get swopped. Instead you find that the saw, for instance, is changed for the syringe. And to make it even more confusing, not all objects are swopped, so the other saw may remain in the correct room. And why not? A room only becomes stable when the right object is put there, and then only if it's stable. I hope you got all that, not sure I did.

When you've returned all the right things to the right places and are thinking about that cup of tea you deserve, you must prepare yourself instead for the final confrontation with the evil Sumink. I haven't clapped eyes yet on this little lovely, but if the rest of the graphics are anything to go by, he should be worth waiting for.

True, you need a PhD to work out how the game is played. The inlay notes certainly won't help you. And the joystick control takes a bit of mastering, especially when you're trying to negotiate the whirlwind doors. Sainsbury's on a Saturday morning has nothing on the effect those doors will have on you.

At least, though, there's a game in there to be played, and one that should satisfy both hardened zappers and more thoughtful herberts among you. It's not really a mapper's paradise - there are only 16 rooms - but it's the action that counts, and there's enough of that. And the graphics are great - as big, bouncy and fast as the Editor rushing to the bank with her cheque on payday. Attribute problems are kept to a minimum and, those doors apart (if only they were). Double Take's a treat.

It's not really a mapper's paradise - there are only sixteen rooms - but it's the action that counts, and there's enough of that.