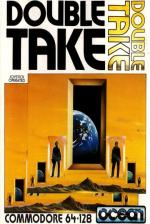 Our stable universe has a parallel which is unstable and evil. The ruler of this universe is Sumink, a dastardly figure who has been biding his time, carefully waiting for the moment when he can cross the dimensional divide and invade our own world. Now the chance has come. A laboratory student's experiment has damaged the space/time continuum, throwing the two universes into a state o chaos, and creating gateways which allow objects and people to pass from one to the other.

The laboratory where the experiment took place has sixteen rooms, along with a huge particle accelerator tunnel. Because of the chain of events it has become linked to an identical laboratory in Sumink's parallel universe. Objects from our universe have been sucked through this tunnel, changing places with identical objects from the mirror-universe - the only way order can be restored is by returning the objects to their rightful positions.

The player controls the student, armed with a gun, to protect himself from the energy-sapping monsters which have been brought into existence by the clash of the universes. These monsters can be shot, but more quickly spring up to take their place. A touch from one of these monsters has a damaging effect on the student's energy, and constant contact eventually kills him.

Every so often the two universes interchange. When this happens, the main screen disintegrates and reforms. A pointer on the display panel shows which universe the student is currently exploring - our universe is represented by a plus sign, while a minus sign indicates the nasty one. When a shift in the universes is imminent, the pointer slides along a scale between these two symbols.

Whenever the student enters a room, an electron appears in the display panel at the bottom right of the screen. If both rooms in each universe are stable, the electron is green - red indicates that both are unstable, and blue that one is stable and the other isn't.

Only one object can be carried at a time, and it is shown in the status area with its stability indicated by a colour code, ranging from magenta through to white. Stability can be changed in two ways: shooting enough monsters or touching a sparkling cloud that drifts around the playing area. These clouds also act as doors between the two worlds.

Once everything is put right, a final deadly confrontation between the student and Sumink takes place - and there can be only one victor...

What a brilliant concept! Double Take has been well thought out, and obviously someone has spent a lot of time coming up with the excellent scenario. Unfortunately, it is slow, and due to this it is tedious to play.

The graphics are very good - there are a large number of nicely animated sprites on-screen, and the statics are well drawn. The sound is also above average - the title music is fairly good, and the effects during the game are simple but effective.

Double Take is well presented but annoying to play - I wouldn't wish it on any games player.

I certainly don't dislike Double Take, but then I can't really admit to being at all enthused by it either. It's just so... average.

It's a shame the graphics, sound and playability aren't as strong as the plot. If that was the case, this would be something really special. But, as it stands, it's an instantly forgettable program, which offers little in the way of challenge and addiction.

I wouldn't recommend it to even the most desperate of arcade adventurers.

This is yet another program floundering helplessly in the endless sea of mediocre arcade adventures. All that saves it from instant obscurity is its excellent scenario - but who wants to purchase a program just for its wonderful story?

The strictly average graphics and sound completely fail to impress, and the incredibly sluggish gameplay only adds frustration and annoyance to the already unexciting gameplay.

If it's a decent arcade adventure you want then shop around - there are plenty available which offer much, much more.

Sound 51%
A couple of tunes which fail to make any impact.

Value For Money 45%
Little in the way of fun for nine quid.

Overall 48%
Another in an endless line of average arcade adventures.

Another in an endless line of average arcade adventures.