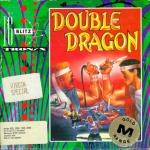 It's the age old story: some pillock took a fancy to Billy Lee's girlfriend (Marian) and whisked her off. However, the pillock in question just happens to be the leader of the notorious Black Warriors gang.

Unperturbed, karate expert Billy is determined to get back his beloved - chop chop. Of course, there are many martial-arty types ready to stop him, so he can take along his brother to help. Various weapons (whips, chains, baby oil [!? - Ed], etc) can also be picked up and used.

The C64 originally arrived a month before its Amiga counterpart, but earned a measly 15% in Issue 46. Why? Well, maybe it was the appallingly slow multi-load, the tiny sprites, the ear-wrenching tune or the omission of many of the coin-op's features. As Maff explained, "the C64 conversion is absolutely pathetic".

Reviewed in Issue 47, the Amiga version came as something of a relief, getting 62%. However, the general feeling was that, although a fair beat-'em-up, it wasn't a close enough conversion of the coin-op. The other main criticism was that it was far too easy, with Maff claiming he'd completed it on his second attempt (mind you, he had already completed the coin-op). On the good side, it's technically fine with some well-animated sprites, attractive backdrops and a good rendition of the coin-op's tune.

Although a fair beat-'em-up, it's not a close enough conversion of the coin-op. The C64 version is pathetic and the Amiga version is far too easy.