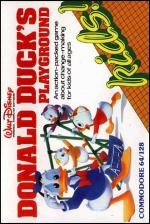 Donald Duck needs no introduction to children the world over, which is why his appearance in this game will guarantee international appeal. This is principally an educational package, but there is plenty of gameplay contained within it.

Donald wants to build a playground for his three nephews: Huey, Dewey and Louie. This will cost money which Donald does not possess but in the town where he lives there are plenty of places to work.

The opening screen finds Donald on the High Street and he can wander into a set of offices on the right of the screen or a series of shops on the left. With no money, Donald's first move is towards the offices. These represent the Amquack Railroad Company who need signalmen, the Toy Store who need shelf fillers, the produce market needs packers and McDuck Airlines need baggage handlers.

The signalman's job is to control six sets of points so that the Amquack express can reach its destination in as short a time possible. Each destination flashes and its name appears on the screen when selected by the computer. At the lowest level, this is followed by a fairly leisurely time but at the highest level Donald has to flit about like crazy.

In the Toy Shop Donald has to collect toys from the conveyor belt and deposit them on the correct row, correct column of the display shelf. He must also keep a weather eye out for the arrival of the Amquack Express which will shake down all of the toys if Donald has not closed the shutter in time.

The easiest job is catching vegetables and fruit at the produce market. The produce is being thrown off the back of a lorry and Donald must catch it and throw it into correctly labelled boxes. If he fails in this task in any way, Donald throws a typical duck fit which effectively means that the next vegetable will not be thrown.

The airport job involves throwing labelled packages into a correctly labelled truck which is eventually taken away to the waiting aeroplane.

For each game completed, you are awarded with money instead of points and you can spend the money in the shops.

The shops are individually owned by Mickey Mouse, Goofy and Minnie and they sell items which may be of use in constructing the playground. By offering the correct money and selecting any change that may be due, these items are acquired and then you can watch as one of the nephews plays there.

The graphics for this game are what you would expect from Walt Disney and a lot of care has gone into devising the game. A great one, giving education the spoonful of sugar treatment.

A great game, put together with a lot of care, giving education the spoonful of sugar treatment.