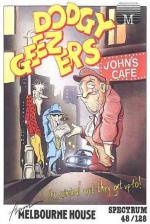 So then me old china, will ver latest Lever/Jones comedy be a nice little earner for Melbourne 'Ouse? You've just finished your stay at one of Her Majesty's hotels, which you were sent to because someone grassed about your part in the Long Ditton Spaghetti Caper. Now you want to pull off a big job to set you up in the Costa Brava for ive; and you can have your revenge in the process. In part one of this multi-loader, you must recruit your gang from the local, East End lowlife - very colourful characters they are too. In the second part, you have to pull off the caper itself.

The game was developed on The Quill but has been 'reprogrammed'. In contrast to when Melbourne House have done this in the past, Dodgy Geezers does look very different to your average Quilled game. A noticeable improvement are the few but high quality, instant cartoon graphics. However, the input routine has been badly programmed, and infuriatingly repeats letters several times if you type at speed. My copy is bugged - you cannot load from tape - which must be corrected before this is released. And the instructions say you can use IT and THEN commands: this is untrue. All not the quality expected from Melbourne House.

The Lever/Jones team gained a good reputation with their wonderful satire Hampstead, and the spoof Terrormolinos. I think fans of these two games will be slightly disappointed with Dodgy Geezers. The humour is not so farcical nor obvious. The game is true satire, which means it's less funny than we've grown accustomed to. For example, the twosome point out how the pet shop is stocked with animal food made from other animals, and shw us "groups of rosy faced children playng with spent fuel rods" at the nuclear waste dump. This is not a criticism - in fact it's admirable of Lever/Jones to try something different from the new well trodden silly style - but don't expect a laugh a minute. Unless, that is, you find cockney rhyming slang funny. Melbourne House expect us to - "There's lots of catchy phrases for the kids to pick up" waffles the PR blurb patronisingly - but it isn't used nearly as entertainingly as the Chicago style in that other criminal comedy, Bugsy.

Time plays an important part in the game: it changes through morning, afternoon, evening, night and the days of the week. Certain locations will only be accessible at certain times - so no shopping after dark. The actual adventure has a different style to previous Lever/Jones successes. There's less to solve. Instead, a lot would seem to depend on being in the right place (not easy - the place is a labyrinth) at the right time having done the right thing earlier on.

As such, Dodgy Geezers is not particularly satisfying to play. The text doesn't liven the game up much, being somewhat sparse; and an unresponsive EXAMINE fails to enhance bare locations. Dodgy Geezers has an original plot and tries something different, but I don't think it's entirely successful.

Dodgy Geezers has an original plot and tries something different, but I don't think it's entirely successful.