Published in The Micro User 5.01 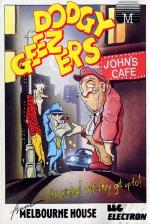 The team that produced Hampstead and Terrormolinos has been at it again. This time it's a B movie spoof - betrayed criminal seeks revenge, and all that stuff.

You play acharacter just released from jail who has to come to terms with his surroundings. Your task is to learn the lie of the land, assemble a team of criminals and, I think, do a blag job on a bank.

I put it like that because I haven't yet solved the first part of this two-part adventure, but what I have seen makes me recommend it.

The cassette inlay gives good, clear directions, and quickly creates an atmosphere that is continued in the game.

There are around 50 locations to explore in part one, and a lot of searching and examining to do. Dodgy Geezers is one of those games where objects are revealed asyou search your surroundings.

To date I've had my hands torn to shreds, been mugged for being too nosey, and had my feet encased in concrete-filled wellies.

A move counter works in the game in two ways. Firstly, every so often a message appears telling you what time of what day it is (you start on a Friday).

Certain locations are not accessible all the time - banks, cafes, pubs, night-clubs and shops have different opening and closing hours.

Secondly, when you get killed you are told how many moves you have taken before you are invited to have another go.

It seems clear that the move counter is a vital ingredient. You only see certain activities at specific times, and you have to time your arrival at some locations precisely in order to meet people and get particular information (such as telephone numbers).

I think this game will keep usall guessing for quite a long time and, provided the humour is up your street, your frustration will be relieved just a little by the chuckles evoked.

I think this game will keep us all guessing for quite a long time and, provided the humour is up your street, your frustration will be relieved just a little by the chuckles evoked.