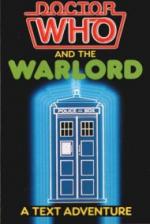 Doctor Who And The Warlord

Doctor Who And The Warlord is a text only adventure of mammoth proportions. There are two parts, one on each side of the cassette and both use every byte of available memory on the Beeb. The opening page of the adventure is actually loaded straight into screen memory.

Although both parts of the game may be played separately, you must complete part one first if you wish to be fully successful in the second part.

The object of the game is to seek out the Warlord who is meddling with time to prolong various wars and battles. Having found him, you must then destroy him.

There is a list of keywords available at any time during the game and the main commands can be abbreviated to single letter. A nice feature is that you may enter multi-statement commands such as "Get the radio, switch it on and use it".

You may save your game position to tape anytime you wish and also may store your current position within the computer if you think you are about to get killed by typing "Store". When you have been killed, you can return to the last position by typing Ctrl-S.

I haven't got very far at all with this adventure so far, as I must admit to finding it very heavy going. I am not a fan of Doctor Who and never have been so maybe I am biased against the scenario from the start! I can only judge from where I have got to so far, that this is definitely not an adventure for beginners and would go even further to suggest that it would best only be tackled by the most experienced adventurers.

Doctor Who And The Warlord

Other BBC Model B Game Reviews By Shingo Sugiura

This is definitely not an adventure for beginners and would go even further to suggest that it would best only be tackled by the most experienced adventurers.