1st May 1987
Doc The Destroyer
By Melbourne House
•
Spectrum 48K 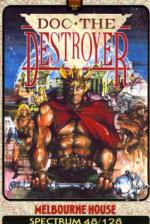 Doc the Destroyer is the first of an advanced race of superbeings with programmable levels of strength, endurance, intelligence, luck and charisma. Each of these attributes is assigned a value, from a total of 60 available points. And Just as well too, for the bewildered Doc now finds himself in a scarcely habitable Earth of the far future.

Remnants of the human race live in and around a city surrounded by an energy dome. Society has divided into a band of Priests controlling the Tower of Knowledge, the populace who live in the rest of the city, and mutants cast from its boundaries.

Doc is accused of spying for the hated priests and becomes the object of a manhunt. He escapes, but with little money and only a wooden club for protection.

Location descriptions scroll down the right-hand side of the screen - arcade adventure style - with a menu window displaying the available options.

Doc's characteristics determine his ease of progress - a high level of luck enables him to slip past guards unnoticed, whilst the higher the degree of intelligence he possesses, the greater his ability to influence the minds of other men. Our hero is forced into combat with bounty hunters, horrendous hounds, and psychopathic slugs.

The endurance levels of Doc and his enemy are depicted as shrinking bars below the combat zone, diminishing with each sustained hit. A character dies when his endurance drops to zero.

I was eager to play this new release from Melbourne House as I'm a very keen role-player. But I was really disappointed, this arcade-adventure places its emphasis on killing horrible little nestles and not much thought has been put into adventuring. Doc's facial expressions are nicely animated, as are most of the graphics - but the gameplay is a bit tedious.

Doc The Destroyer is an interesting concept, but the idea has not been developed to its full potential. The graphics vary from a superb Doc face that reacts to your decisions down to a terrible fighting sequence. The best screen is without a doubt the characteristics section - it's a game within itself. Doc The Destroyer doesn't contain enough to be fun to play. Doc is a good character, but the game doesn't suit him.

The concept appears to be quite attractive, but its implementation leaves a lot to be desired. Why Melbourne House should use the unattractive Sinclair character set for a game which relies so heavily on text leaves me mystified, The idea of having Doc's face to convey the characters emotional responses to your actions is a good one, and that remains the single best aspect.

The idea of having Doc's face to convey the characters' emotional responses to your actions is a good one, and that remains the single best aspect.