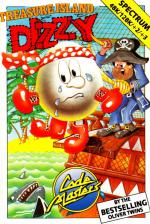 Eggs never get a rest do they? One minute they're being put out of a job by health ministers and the next they are starring in their very own game. This is the second eggy adventure from Code Masters with my mate Dizzy in it. Called Treasure Island Dizzy it is (surprise, surprise) set on an island full of hidden treasure.

Dizzy booked himself on a round-the-world cruise but somehow ended up in a spot of bother with the captain, Long John Silver. All his fellow passengers turned out to be pirates and he was in a right pickle (you could say he was a pickled egg!). He ended up walking the plank but just managed to scramble onto a nearby island (groan).

The graphics on the island are all cartoon-style with an impressive amount of colour and great detail. The Dizzy sprite is the same as in the original game with all its jumps and cute little rolls. It's this cuteness coupled with the playability that makes it so addictive. The puzzles in the game are just at the right difficulty level but there is one aspect that I found annoying, you only get one life! Poor Dizzy can be going along nicely and if he just puts one foot wrong - he's omelette.

There are two ways to complete the game. One is to collect all the gold coins (some are really well hidden), and the other is to find some way off the island and back to the friendly Yolkfolk. Either way I guarantee you will get hours of fun out of this game, a must for everyone's software collection.

I guarantee you will get hours of fun out of this game. A must for everyone's software collection.