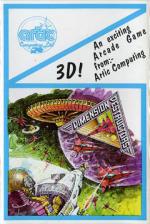 Dimension Destructors was written by the author of Tank Battle, a 3D Tanks game, which rather suffered from a severe lack of speed. These 3D techniques have been harnessed in a more adventurous project in Dimension Destructors. Apparently, you are in the lonely but peaceful reaches of the vast unexplored regions of outer space. Suddenly a dot appears on the scanner screen of your flight craft. As you thrust forward, the dot grows until it is a 3D space craft. With nowhere to run and some unexplained reason for believing that the occupant wishes to destroy you, you can either move to avoid it or attempt to hit it with your laser. These alien ships are reasonably tame - they only try to collide with you head-on. As time goes on, more vicious aliens which actually fire at you, join in the fight.

Dimension Destructors is compatible with Sinclair, Kempston and Fuller joysticks which is a definite bonus as a joystick greatly enhances the game. Why it is called Dimension Destructors I do not know - where are you destroying time or any other dimension?! Nowhere in the instructions/story does it say why the aliens want to exterminate you: aliens do seem to get a very rough deal as far as computer games are concerned! If we are not careful, someone will start an ALF, Alien Liberation Front and go around letting all those poor green monsters out of Space Invaders machines!

The 3D graphics are some of the best I've seen (bar those of Rommel's Revenge and QS's new Tank Battle game). They are fast and reasonably smooth and the whole game is definitely hectic. though easy to play at the outset, it gets harder and harder as your ability increases. The concept of the game is simple and slightly simiar to one or two of the Atari games but overall it is excellent. Dimension Destructors is highly addictive - a game which must be played "just one more time" and very good value.