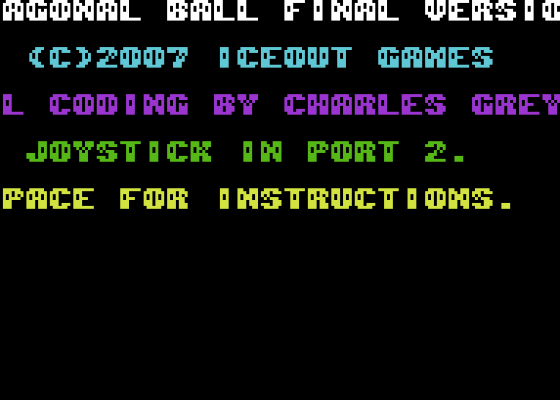 Chris sinks his teeth into Iceout's Diagonal Ball in his debut RGCD review (and adds several new words to the dictionary in the process).

Since recently discovering the retro homebrew community, I've developed a very healthy respect for the people that create new games for any retro platform, be it either the Spectrum, MSX, Atari, or in this case, the Commodore 64. These are the folks who give continued new life to systems that might otherwise be forgotten. Sadly, not every new release is as well-deserved of such respect as recent headline-grabbers like Joe Gunn and Redrunner. It's into this less distinguished pile that Diagonal Ball ends up.

Iceout has released several mildly successful minigames for the C64 over the past year or so, but this is his first fully-fledged game. Its name tells you a surprising amount and hints at the dullness lurking within: Diagonal Ball puts you in control of, erm, a ball. And guess what? It moves diagonally! Pure genius, I say. With your amazing ball of diagonality (if that's not a word, it probably should be invented just for this game), you must destroy all of the bricks that are clumped around each screen in Traz-esque fashion, then hit the exit block to progress. Quite a simple concept... and therein lies the problem.

Your control of the ball is rather limited. While you can coax it left or right with the joystick, its vertical direction will only change after it bounces off an obstacle. This means that clearing the trickier sections of some levels seems to rely more on luck than good judgement or skill, and you'll probably end up waggling left and right frantically in order to get the ball to go where you want. Then there's the small matter of "swerving"; by holding the fire button you can stretch the ball's horizontal movement, enabling you to reach groups of bricks that would otherwise be impossible to get rid of. This, too, tends to be an exercise in trial and error. 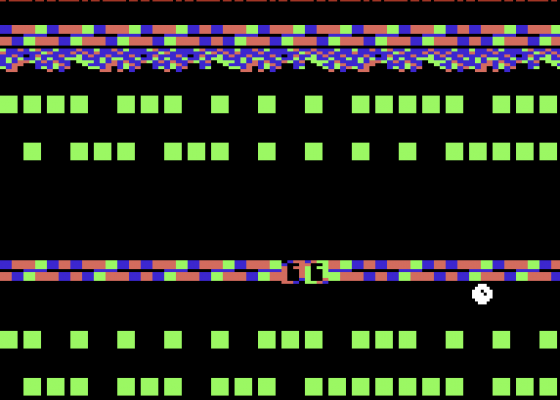 Throughout the game you must keep half an eye on the energy counter - if it reaches zero then it's game over, although each brick you destroy adds a small bit of energy to extend your life. Whatever energy is left after completing a level is used to give you a score bonus. Which is nice, except that there isn't a highscore table, so the idea is made pointless. Unless, of course, you happen to use an ACME Pen & Paper Deluxe Highscore Table System (sold in hardly any major outlets). Somehow I can't see anyone playing the game quite that much.

Presentation-wise, things are good enough for the job at hand; colours are toned together well enough and don't clash too badly, though as with most else in the game, the graphics are plain and simple to the point of being boring. Some more variety wouldn't have gone amiss, and the main menu in particular could have been spruced up. In the audio department there's no music to break up the drudgery and the sound effects are almost nonexistent, so it's fortunate that you only have to diagonalate (wahey, there's another word for the dictionary) through a dozen or so levels.

Overall, despite being an almost-kinda-semi-interesting idea, Diagonal Ball doesn't reward you for playing it and feels more like an advanced prototype than a full game. Once you master the controls well enough to clear the first level there's very little that will present you with a further challenge. Later screens cry out desperately for some variety; this could have been added by adapting some staple brick 'n' ball ideas like multi-hit blocks or wandering enemies. The only replayability you're offered is through the chance to change the ball's movement speed before starting a game.

Hmm... I'd best finish this off before I end up creating any more diagonalific (ack!) words to fluff out this review. It boils down to this: even if you're a die-hard fan of Breakout games, you're unlikely to get more than a few minutes of enjoyment from Iceout's take on the genre. Avoid.

Even if you're a die-hard fan of Breakout games, you're unlikely to get more than a few minutes of enjoyment from Iceout's take on the genre. 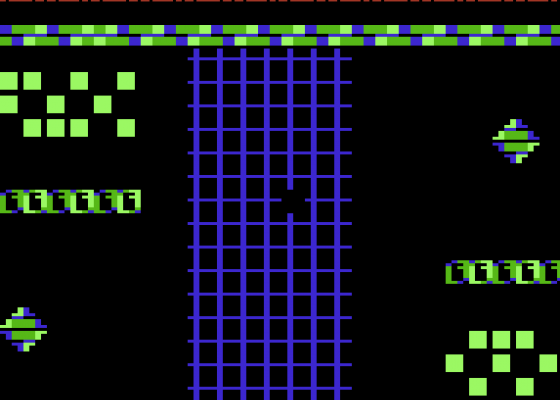 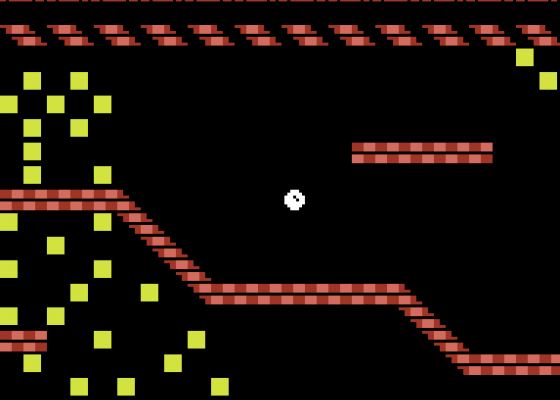