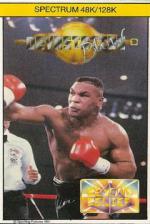 Blam, bash, smack, crunch, splaattt! Duck down dudes 'cos Mighty Midget is about to try and knock your block off in a face-breaking, teeth-flying, blood-splurting, boxing bash 'em up that makes Mike Tyson look like a (jailed) pussycat.

Devastating Blow is a quite good, if inordinately simple boxing simulation, with bright colours, clear graphics, and variety of bone-crunching sound effects. Game set up is easy enough. After typing in a really scary 'power' name like Big Al'...(eh!), a status sheet appears telling you where you stand as far as strength and stamina are concerned and also (unfortunately), how many unlucky chappies your current opponent hos slaughtered so far.

Now it's into the ring! Movement is very basic and punching is either low or high but you can punch quickly and there is a special super punch available too which efficiently levels opponents. Hitting someone is actually quite satisfying thanks to the aforementioned sound and the little drops of sweat which bounce off the boxer on the receiving end.

A bout consists of 13 rounds, each lasting about a minute and a half. The idea is to knock the stuffing out of each other until either boxer's health percentage, displayed at the bottom of the screen, reaches about fifteen. As soon as you or your opponent go this low the ref gives a quick 10 second count and it's all over. In between bouts, you get a chance to practice moves on a punch bag and as matches are won your World Championship standing improves. (After starting at eighth,) This is the whole object of the game, though I don't know how high Devastating Blow will actually go in the software ranks.

Ahem, knock the stuffing out of your fellow boxer until his health percentage reaches about fifteen. That's it, so I really don't know how high Devastating Blow will actually go in the software ranks.