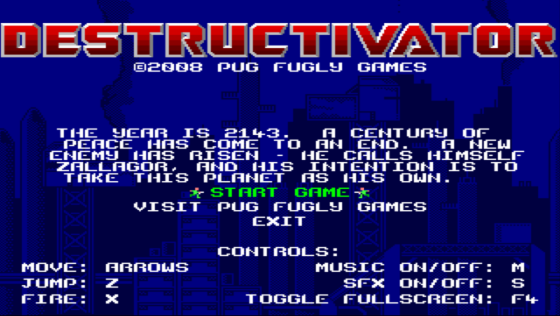 Day-glo jumpsuits, 80's sci-fi, cyborgs with huge whammo-guns and frantic-paced platform jumping action are some of our favourite things here at RGCD HQ - and Pug Fugly games deliver a healthy serving of each in their latest run 'n' gun release.

There's something I feel the need to get off my chest before starting this review. I took one look at this game's title and, after reading the plot, started grinning to myself as a Borg-ified version of Mr. Motivator sprang into my mind's eye (for anyone lucky enough not to know, Mr. Motivator is a fitness instructor with a fondness for flourescent clothing who became famous on UK breakfast TV in the early 90s). Now I can only imagine the hero as a brightly-dressed health fanatic who shouts "Get off yo fat ass!" at enemies before perforating them with his blaster. This isn't helped by the fact that you control a character who is a rather charming shade of radioactive green. But... erm, yes, let's move swiftly onto the game itself, shall we?

In this all-new blockbuster plot that I'm certain will bowl you over with its originality, in the year 2143 an evil overlord dictator mastermind known only as Zallagor is on the warpath. He intends to enslave every single living being on Earth (gasp!) and will stop at nothing to achieve his nefarious goal! Terrible, eh? His armies have obliterated all that stood before them and the future looks grim... but in an astonishing twist to the story, the remaining free people of the planet have created one final weapon to fight with: a half-man, half-machine soldier called the Destructivator! Playing as this biomechanoid protagonist, can you save humanity from a fate worse than having to read clichéd storylines over and over again?

In vintage platformer style, you run, jump and climb around landscapes which you'd be forgiven for thinking came out of Lode Runner. We're not interested in collecting gold here, though. Your only objective is to destroy all of Zallagor's henchmen on each of screen so you can progress to the next. All of the opponents you face are deadly in one way or another, but some are downright lethal; initially you will fight the purple-suited infantry who try to zap you with phaser beam weapons - they take a moment to charge, giving you chance to duck or jump out of their way. On later levels come red-garbed soldiers who chuck grenade-like projectiles at you, and later still are the yellow pulse-rifle shocktroopers who attack with a succession of energy blasts. 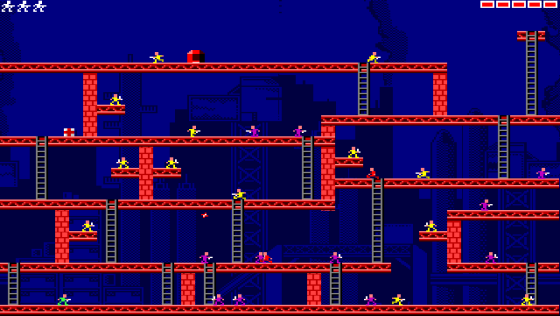 There are also robotic foes and turrets of various types who will gleefully harass you from a distance. As soon as they catch sight of your hero they'll start pinning you down with highly accurate fire, so it's a good idea to take potshots at them from as far away as possible. Of course, this isn't always possible, and as for when the giant terminators appear... well, I hope you have good reflexes! If you're in a tough spot (hang on, silly me, that should be 'when', not 'if'), you can always try finding a first aid kit which will restore a dot of your energy before pressing on. The Destructivator can take four hits before losing a life, but completing a screen refills your energy. Just as well, really, considering there are no passwords to save your progress in the next game.

All in all, gameplay flows smoothly and Destructivator's difficulty is balanced finely enough that you're never left feeling totally vexed; "Easy to learn, hard to master" was obviously at the forefront of the developer's mind because you really will need to get into an almost zen-like rhythm toward the later stages. Completing all 20 levels doesn't take ages but does require just enough skill to allow you to feel suitably smug afterwards, and even if you die trying there's a nicely flowing soundtrack which you won't want to instantly turn off. The gloriously blocky visuals shine through at all times, although I would say that the upscaling seems to be slightly out in some places. Otherwise, the graphics - especially the backdrops - are as polished as pixel art of this type gets, and the ubiquitous 'sfxr' sounds effects fit in perfectly. But, I wonder... do my ears deceive me in thinking that the first aid box pickup comes straight out of Cave Story?

These minor niggles aside, Destructivator unashamedly transports your PC back in time to somewhere in the 1980s and runs off with the flux capacitor. It forces you to play it until you finish it; yes, of course, you -could- give up and come back at any time, but that's only a cleverly-crafted illusion ("One more go will do it, I nearly had it that time!"). It's more retro than bubble cars, pod chairs and in fact the whole of the 1960s put together. And it's done so well that you won't mind the fact you just threw your keyboard across the room for the second time because of those bloody terminators. I just wish there was some way of scoring each game because as it stands you're unlikely to replay Destructivator after defeating Zallagor. Still, there's plenty of room for a sequel! hint, hint

I doff my cap to you, Mr. Pug Fugly. You've captured the essence of oldschool gaming in a way that few others have. Play this game and I guarantee you'll be entertained for more than a few minutes - frustrated too, yes, but you'll be having far too much fun to walk away...

Play this game and I guarantee you'll be entertained for more than a few minutes - frustrated too, yes, but you'll be having far too much fun to walk away. 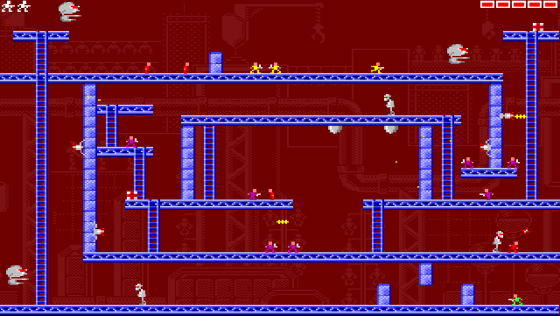 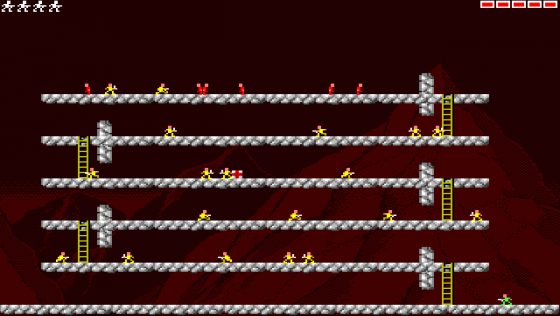 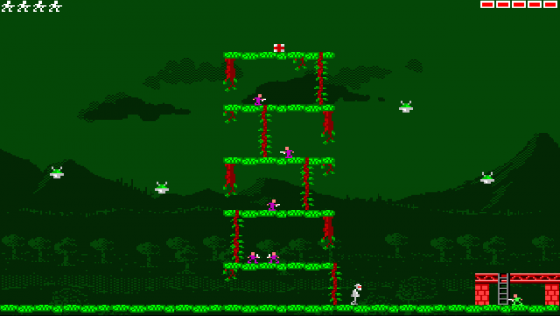