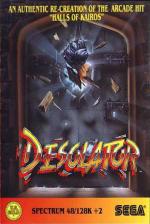 For a vertically-scrolling medieval Ikari Warriors/Gauntlet clone-ette, Desolator ain't 'alf bad. Taking the role of fearless hero Mac, you have to invade the castle of the evil Kairos, the Great Salad (well, that's what it looks like on the press release, but I'm sure it's a printing error).

But why, oh why, would even the roughest toughest hero want to risk his life in such a foolhardy enterprise? Well, at heart he must be a great big softie, because it's all in aid of a group of spotty schoolchildren who have somehow become trapped in Kairos' magic mirrors ("Mum! Me head's stuck in this 'ere magic mirror!").

So, proceeding through the levels - loaded separately in 48K, or all together in 128K - what do you come across? The backgrounds are very nice, shown in perspective from above. You start off with no weapons at all, and only your mighty fists can ward off the enemies who spring up around you in puffs of smoke. Smack them on the nose and they collapse convincingly, but you won't deal so easily with the armoured knights who pop up later on. They'll throw streams of knives at you, and if you bump into them, just watch your energy meter plummeting faster than a sack of puppies in a lake. (Jenkins, I'm going to report you to the RSPCA if you don't start playing nicely right now! - TH).

So you'll be wanting some well hard weapons, won't you? Just look for the symbols with the big bombs on them, and you'll get some authentic medieval hand-grenades to fling around. Don't waste them, though, because you'll need some to blast your way through doors and across drawbridges later on.

You'll also come across transporters which flip you to otherwise inaccessible sections of the castle, and giant urns, which, when knocked over, turn all the surrounding baddies into LOADSAMONEY! Pick this up to improve your score and your self-esteem. (Well, the more money, the bigger yer thingy gets, don't it)?

Every so often you'll see a magic mirror set into the wall. Stand in front of it and smash it, and lots of little weeblies run out. You must catch them before they disappear, and if you capture 9 you become temporarily invulnerable, and can walk happily through anything. I think this must be the solution to the chamber at the end of the level, where you find yourself trapped by dozens of floating heads which give you a good going over.

Plenty to see and do then, just like Chessington Zoo, but, also like Chessington Zoo, if you've seen it once, you've seen it a thousand times. Desolator isn't sufficiently original to earn a top score, and there are plenty of annoying points, like the baddies who look identical to the hero, and the ones who refuse to lie down even when you drop a hand-grenade right on their heads. Nay bad, then, but nothing to split your buskins over.

Action-packed cross between Gauntlet and Ikari Warriors, without the impact of either.