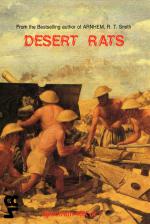 RT Smith won acclaim for his last game, Arnhem. His latest work, Desert Rats, outclasses Arnhem in terms of both scale and quality. Arnhem depicts a single battle, massive though it was in terms of the men and equipment deployed by both sides. Now Mr Smith has returned with a truly massive game covering the history of the North African campaign in a series of scenarios which range from a seven turn introductory game based on the British Battleaxe offensive to a six hundred and twenty four turn game depicting the conflict from Pommel's arrival in the Spring of 1941 up to his departure at the end of 1942.

There are no skill levels as such, but the matter of game complexity is dealt with in an innovative way related to the status of Malta. There are three different ways Malta's importance can be portrayed. The first is the historical setting, where Malta is used successfully by the British to increase their own supplies and cut off those of the enemy. The second, Operation Herkules, assumes that the Axis forces capture Malta and as a result their supply levels increase greatly during the latter half of 1942. The third option does not allow the British to use Malta or assumes that Axis suppression was severe enough to negate the advantages offered by Malta thus constantly increasing supplies reach the Axis forces.

The game can be played by one or two players, and in the one player game the computer can play either side. As usual, the excellent rules book is crammed with historical notes as if the author is urging you to test the validity of his game. Indeed, the booklet often provides an insight to good strategy and is worth reading even by those familiar with the historical context as a whole, because the information it contains is so relevant to the scenarios presented.

The sequence of play allows the British player to order his forces first, with the Axis player following. Movement and subsequent combat are handled simultaneously once both sides have issued their instructions and play proceeds to the next turn. As usual, reports are always available and the same variety of combat and movement modes as those found in Arnhem are employed successfully here.

Apart from the standard move/fight options available to a unit, the British player has the option to GO TO PORT at the rate of one unit per turn. The order allows British units to travel from Tobruk to Alexandria, or vice-versa, as long as Tobruk remains held by British forces.

Units are mainly in the form of brigades, battalions and HQs. Italian units are only depicted as divisions. Unit symbols are clearly marked for easy identification and each side has different representative colours. For those using monochrome monitors, Axis and Allied forces have opposite facing units and British units are also shown in outline.

The screen consists of four areas. The largest of these shows the map of the region over which the battles were fought. A small window in the upper right hand corner of the screen shows the date and time (the game is not 'real-time' however). Below this is a dual purpose window displaying order options and messages and finally, at the base of the screen, the identity of the unit currently being ordered is displayed.

Stacking rules are also employed, allowing balanced groups of units to make concentrated moves upon the enemy. Incidentally, as losses are inflicted on units, they may actually change their designation and become parts of other units but such things are handled in a fairly straightforward manner so as not to burden players with too much irrelevant detail.

Logistics play an important part in the game. Various kinds of movement and attack orders deplete the supplies of units to varying degrees. The supply rules in this game are the most complex I've dealt with for some time. Unless attention is paid to the depletion of units' supplies, you will soon find yourself up a proverbial gum tree!

Although the game plays in a similar fashion to Arnhem, it is u reassuring to see that the author has decided not to rest on the laurels of his previous creation and has modified the rules system so the actual battle sequences play faster and yet more confusingly to add realism. The effect works well and enhances the feeling of tension prevalent throughout the game.

There are six scenarios in all. The first five are in chronological order whereas the last one attempts to cover the entire campaign. To be honest, there was no way that this last scenario could be played in time for the review schedule but from playing the others, I can only say that it looks very tempting indeed. To play the campaign to its conclusion would undoubtedly require several sessions at the computer. To master this game would probably require even more time. The only way to win the scenario is to destroy all the opposing units. At the same time, your own losses must be kept low. This is the only major point of contention I have with the game. As the author himself points out in the historical notes, the Axis powers withdrew before they suffered total annihilation and even then, inflicted massive losses on the Allies during the campaign. The other scenarios however, each have their own victory conditions and all of these reflect the difficulty of the actual situations.

One other area, not so much an inaccuracy as an omission, is the lack of airpower on either side. This can be accounted for, however, when you consider that rarely did the RAF or Luftwaffe have any decisive affect on engagements, and as the author himself reminds us in the designer's notes, there were some limitations imposed by the lack of memory an incredible amount is packed into the game.

But this does lead me to the final point. Whilst the game excels in some areas, I feel that Mr Smith may have bitten off more than a Spectrum can chew. It may seem unfair to say this as the author is evidently a most capable programmer and a dedicated military historian. But the designer's notes are full of excuses for the things he couldn't put in all because of the limitations of the computer rather than his limitations as a Programmer. Perhaps a modular series of games would have worked better. Air support rules could have been added for the sake of completeness. The scale could have been one that better suited the game and Mr Smith's apparent wishes. Then the Spectrum would have had a classic series of wargames, I'm sure.

What Desert Rats does offer is a massive game that strives to retain every historical point of accuracy despite limitations and ever present compromises. Perhaps these criticisms should be laid at the producers and not the author himself. Perhaps other factors prevented a series of games from being developed. Whatever the reasons, Desert Rats is a superb game that could have been even more substantial.

A superb game that could have been even more substantial.