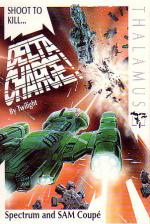 Aeeeeiliiieee! No more! Why do people send games like this to try both the paying public and innocent reviewers? What sort of warped games designer thinks it would be "fun" to make a game so bum burstingly impossible and engineered to infuriate?

Before you can even get into any of the (mediocre) action, you must battle through an utterly maddening couple of waves. Why are these stages ,so rubbish? Because your bloody ship has got about as much oomph as a solar powered torch, and as much firepower as something that can only fire one shot at a time.

The only course of action is to collect as many power-ups as you can. Since none are available until you've shot entire waves of alien filth (and even if you work over the odds and entitle yourself to a number of power ups, YOU CAN ONLY COLLECT ONE) the initial stages of the game will inevitably turn you into a rabid lunatic, capable only of shouting "Stupid! Stupid!".

Even the sodding icons kill you if you're not careful. Unless you waste entire waves of aliens (far from easy since it takes a good three seconds to get from the top to the bottom of the screen) the icons remain as deadly blocks, floating in space, sometimes utterly unavoidable.

If you're very patient indeed, you may find some enjoyment in Delta. Otherwise, it'll just give you a headache.

If you're very patient indeed, you may find some enjoyment in Delta. Otherwise, it'll just give you a headache.