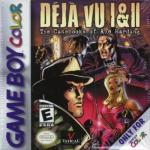 Haven't we been here before?

Hmm, this seems strangely familiar... ho ho ho. Yes, obvious jokes aside, Deja Vu I & II is one of the first graphic adventures on the Game Boy Color and - rather surprisingly, it has to be said - it's something of a goody! You play a private investigator who wakes up with a serious case of amnesia, and it's up to you to get your memory back, find out what on earth you were supposed to be doing and solve the case you were originally working on!

Deja Vu I & II is a really engrossing graphic adventure which - against all expectations to the contrary - works! With shades of the PlayStation's Broken Sword II, this game is incredibly addictive and a must for all Game Boy Color adventure fans (we know you're out there somewhere!)

Lastability 80%
Should keep going for some time!