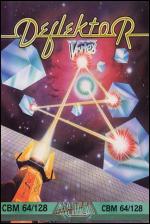 Gremlin's new logic game is set within the confines of an optical circuit, the completion of which is dependent upon the correct manipulation of a laser beam.

Each screen holds a laser generator and receiver, which must be connected by an unbroken beam of light. The beam is directed by a series of mirrors, some of which auto-rotate, but most can be turned manually by positioning a pulsing icon over them, holding down the Fire button and moving the joystick.

Other equipment aids the path of the beam, such as a refractor which sends the beam out at a random angle, and fibre optics which transfer the beam from one part of the screen to another.

There are also obstructions, which detrimentally affect the path of the beam - the system overloads if the beam comes into contact with mines, absorbing blocks, is directed back along itself, or the beam length becomes too great. The extent of the overload is represented by a bar which expands as the laser overheats.

Each circuit can only be completed when all the grey cells have been destroyed, and a constant power drain imposes a time limit on the proceedings. A practice mode is included, allowing three screens to be played with a slow energy drain. This allows familiarisation with the action, and no score is recorded for the effort.

Deflektor has a high level of presentation and pleasingly simple gameplay.

Despite the apparent lack of difficulty, once you start ploughing through levels, the action becomes a total mind-bender, requiring great care, speed of thought and a good judgement of angles. On top of the clear (although very basic) graphics, the sound is high quality, with some tuneful title music and nice 'lasery' noises throughout.

It seems that the revival of the good puzzle game is well and truly accomplished, with Tetris, and now Deflektor. For some highly entertaining action that's surprisingly captivating and a real departure from the normal blasting fare, try this out.

Arcade/puzzles games are all too rare, with Zenji, Split Personalities and now Deflektor being the only notable examples of a sadly untapped genre.

The gameplay is very straightforward, but incredibly engrossing - I was really surprised at how much concentration is required to deflect the beam around the screen without overheating the laser.

My only reservation is that it becomes a little full having to work all the way through lower screens to get to higher ones - a level select would be appreciated.

Still, that's my only quibble. Deflektor is very enjoyable, and provides an original and worthwhile way to kill time.

The latest addition to the growing family of good Gremlin games, takes the theme of Rebel and improves on it tremendously. The gameplay is deceptively simple in appearance, but the screens are very well designed - there always appears to be just one cell that you can't reach!

I enjoyed playing it for the first few times, but since the game progresses by screens, you tend to find yourself playing through the first ones time and time again like an automaton: they never change so the method used is identical each play.

I would have liked some password affair to allow you to access later screens, but this is really my only reservation. If you can handle this, then Deflektor is certainly a worthy purchase.

Presentation 70%
Comfortable control method, and the game is reasonably polished.

Graphics 73%
The laser beam is effective, rapid and believable, while the screens are simple but adequate.

Hookability 82%
Easy to use, interesting to play and addictive.

Lastability 75%
Plenty of circuits to attempt, although once completed a few times they may not represent such a strong lure.