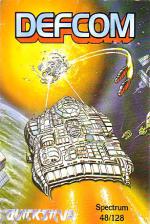 No danger of pussy-footing around the subject here, I can tell you. Everything goes wrong right from the beginning. Instead of the commies being behind an evil plot, however, it's the oldest standby of the lot - the mysterious alien horde.

While the satellites go about their entirely peaceful business (yet they're choc-full of really big lasers), a huge green-headed boggly-eyed fungus monster creeps up on them and points the damned things toward various important places on Earth, and starts destroying cities.

Taking control of a spaceship. you fly over the Earth's surface, darting back and forth in order to save cities from destruction.

The screen is presented in rather impressive 3D, showing the world's rotation beneath you. and all the horrible little beasty aliens zooming around. The aliens look a bit like throat lozenges with water-wings, but they're quite impressive, all the same.

Your space-craft is viewed from behind, and moves around in a rather uncomfortable arc, a-shootin' and a-firin' for all it's worth.

And the music - like that on Quicksilva's other recent release. Glider Rider - is very good indeed. Very, um, 'spacey'.

Now. things would get purrrretty ruddy hairy if you had to dart over the planet without some form of assistance. Thankfully, a mappy thing can be dragged on to the screen indicating the locations of yourself, and the satellites.

When the message 'Gor! Luvva duck. Tokyo is having a bit of gip.' (or something) pops up, you can flick to the map, and work your way to Tokyo. The only problem is that, as it takes such an astounding amount of time to reach your destination, the aliens will have already moved on.

Defcom is 'classic' shoot-out with a few inventive touches and a completely wasted 'political' novelty angle. The 3D is nice but too superficial, though, to maintain one's interest.

Defcom is a moderately addictive shoot-out with a tiny bit of strategy thrown in for good measure. Great music.

Defcom is a moderately addictive shoot-out with a tiny bit of strategy thrown in for good measure. Great music.