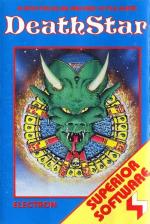 Atari originally were going to launch a game on the BBC called Sinistar. It was very good and followed the original arcade game faithfully (Well, the bits that weren't accurate were of no great consequence). However, Atari got into some difficulties, Uncle Jack took over and I'm sure that you all know the rest.

One of the 'reforms' introduced by the new Atari corporation was that Atari would no longer produce software for any non-Atari computer. So a number of games were left floating. Superior Software originally licensed Tempest from Atari, but then Atari decided that they didn't really want to do that either.

Hence the renamed DeathStar, otherwise there is no difference between the two games - i.e. they are the same games. In fact, when you knock out the DeathStar, it prints on the screen "Sinistar destroyed"...!

The game itself is an incredibly fast action game of many levels. The object of each level is to destroy the Sinistar - Oops! Sorry, DeathStar - with sinibombs - Oops! Sorry, starbombs. The way that you get these bombs is to mine asteroids with your ship's guns. When you shoot up an asteroid enough, a crystal will fly off it. Pick up the crystal and you have made yourself a Sini... (Sorry) Starbomb. You can carry 24 Starbombs at any one time.

As you might have guessed, there are one or two nasties out to stop you. Warriors look like little tanks and have rotating turrets that can fire shells at you; they also mine crystals that you miss and also the crystals that the Warriors mine. They carry the crystals back to the DeathStar and he is built up piece-by-piece.

When twenty pieces are together, the DeathStar will come after you. Starbombs are the only things that will destroy the DeathStar, one bomb per piece. When the DeathStar has been zapped, you go onto the next level.

Apart from the first level, each section has its own personality. The Worker zone has more workers, making the DeathStar faster to be constructed, the Warrior zone has more warriors making just staying alive difficult, then the Planetoid zone and the Void zone; the Void zone has very few asteroids, making it very difficult to get any crystals at all.

A very fast and involved game. Keeps you playing it for hours. Well worth getting.

A very fast and involved game. Keeps you playing it for hours.