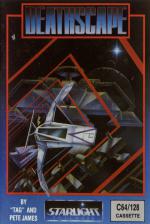 Treachery is the Varg's middle name; its also their first and third. They're that kind of race. And they're sending hundreds of combatants into the Deathscape, a gladiatorial arena where disputes are settled.

Varg fortresses have been built in the Deathscape - they must be destroyed. You have been chosen for the task in this ten-level combat- and-navigation game.

You fly a variable-speed fighter down a space tunnel. Indicators show your proximity to the tunnel walls, which through friction and contact weaken the craft's two shields. The fighter can reach other levels through tunnel junctions.

A grid map shows the craft's position and direction as well as fuel dumps, enemy fortresses and generators. Some regions of the grid are neutral and contain many generators and fuel dumps; they belong to the SOL FEDS. So discretion is essential if you're not to be labelled a rogue pilot and have your mission terminated.

The Vargs have five types of drones - fighters, scout craft, bombers, suicide ships and interceptors - attacking along the tunnel's length. They can be destroyed for points.

Your craft carries rapid-fire plasma cannons (capable of autofire) and up to eight target-seeking missiles (1'SMs). An extra TSM is acquired when a Varg fortress has been destroyed, and a blue square registers, representing part of the 'Varg Code'.

After ten blue squares have been activated the drone-producing Varg mother ship can be reached. Plasma cannons are ineffective against the mother ship's armour; four missiles must strike the vulnerable reactor casings. Destroying these gives you extra missiles.

If your own control ship is activated you can teleport back to defend it with its own plasma cannons. After a successful transfer, a view of the control ship's cockpit is activated and six energy bars displayed. Should three of these fall to zero them the ship is destroyed and your mission is over. But if you repel the attackers, you can return to battle with two extra missiles in your armoury.

Your fighter has two independently-emptied fuel tanks; when a sideways movement is made, the tank on the appropriate wing is emptied faster. Fuel levels can be topped up by destroying fuel dumps, and the destruction of generators re-energises shields.

'Deathscape is a mystery to me. The instructions are very long and say nothing of importance; they state the obvious and it with loads of jargon. Prominence is given to the folks who the sound effects and music, but for Spectrum owners hoping for some Ben Dalgleish tunes there is NO music, so don 't be misled by the all-formats inlay. The graphics are well drawn, but the animation is very jerky. As shoot-'em-ups go there's very little to do in Deathscape, and it soon becomes repetitive.'

'Ever since the Star Wars-type coin-ops hit the arcades several years ago, I've grown steadily tired of all the 'space, the final frontier' efforts. Deathscape is yet another 'shoot the aliens and save the Earth' game. Graphically it's good; the detail on the cockpit instrumentation is neat, especially the pilot's hands as he steers the spaceship. The aliens swirl excitingly round the screen and really cause you some aggro. It'll take many games to get anywhere near the mother ship ... damn, I'm starting to like Deathscape now... it's not really as bad as I feared!'

'The packaging is good; I liked the artwork, but unfortunately (yes, you guessed it!) the game doesn't match it. There's nothing wrong with the programming apart from the minor awkwardness of the different control keys, but the game design itself is a letdown. I didn't play it for as long as I do most shoot-'em-ups, because of the repetitive action. So there's nothing gripping here; but Deathscape is a fast and pretty shoot- 'em-up.'

There's nothing gripping here; but it's a fast and pretty shoot-'em-up.