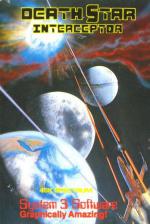 Some of the more game orientated 'zines have been raving about this, but I can't really see what all the fuss is about I'm afraid. Death Star Interceptor is a very competent piece of programming, but apart from the third screen it's really just space invaders with souped-up graphics.

The first screen is a bit of a bore. You have to launch your ship from a runway and steer it through some sort of portal. The whole thing lasts about five seconds and seems fairly hit or miss, as the ship rather over-reacts to its controls. The launch is announced by some good speech synthesis, better than in Ghostbusters I think, but listening to this doesn't make the screen any more interesting to play.

The second screen is the Space Invaders bit. The graphics are excellent, no doubt about it. The attacking ships start off as points moving against the starry background and growing and taking on shape as they zoom in on you, but you are still just stuck moving your ship left and right (with a small room for up and down movement) at the bottom of the screen, space invaders style.

The third screen is far and away the best. The action for once matches the graphics as you zoom along the trench searching for the Death Star's weak spot. The perspective graphics are excellent and the chase through the trench gets pretty frantic.

If you're looking for a shoot-'em-up, then I suppose that this or Incentive's Moon Cresta are the zap games of the moment, but I'm afraid that for me the trench sequence on this just didn't make up for the other screens that you have to go through first.

I'm afraid that for me the trench sequence on this just didn't make up for the other screens that you have to go through first.