Published in The Micro User 3.12 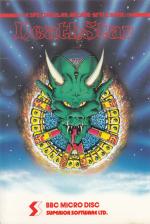 Are you tired of being pushed into the role of super hero, you know the "one man against an entire alien invasion" scenario?

Does your ego shrink as yet another burst of laser fire shrivels your main weapon? Well perhaps Deathstar from Superior Software is for you.

The basic plot remains the same, but there are no reckless acts of heroism here. You are the pilot of a space ship that traverses a colourful scene, in the early stages shooting harmless asteroids.

Your task is to mine and collect a full load of 24 crystals that are discharged from the asteroids.

Two types of lesser aliens hinder you in this task -workers who steal your mined crystals and warriors who take the odd pot shot at you.

Eventually the arch villain of the hour, the Deathstar, assembles itself and - this is the unheroic bit - you must run away from it as fast as your little ion drives can carry you.

At the same time you must let loose your load of crystals, now self-transformed into death bombs, until hopefully, piece by piece the Deathstar is destroyed.

If you can accomplish this, you are transported via a bonus screen to the next level, where the asteroids get fewer, the workers and warriors are more numerous and intelligent, and the Deathstar needs more bombs to kill it.

The game is a good conversion of a minor arcade hit. The graphics involve the use of large, colourful sprites which, along with the background, are smoothly animated.

Add to this some exciting sounds and you have as good a copy of the original as Planetoid was of Defender.

Large, colourful sprites which, along with the background, are smoothly animated.