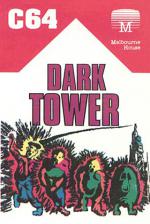 Oh no...! It's platform time again. This is yet another Jet Set Willy clone and is marred by uninteresting graphics and a lack of original features.

You are Prince Harry and have been turned into a mutant by the Guardian of the Dark Tower. To restore yourself, you have to collect all of the gems littered about the 28 screens of the castle. Letters are given after the completion of each screen and these are to be used to solve a puzzle when you complete the game. The first 500 people to solve the puzzle win a free Melbourne House game of their choice.

As in JSW there is more than one exit to each screen, so you can explore the tower without necessarily completing every screen you pass through. However, a bonus is awarded for completing a screen without losing a life or leaving the room.

The graphics are disappointing. Although smooth, they are very small and spectrumesque. The baddies aren't very detailed and haven't the humour of Jet Set Willy, while mutant Harry looks like an egg on legs!

The sound is the best thing about this game: a thumping good tune plays throughout, but it can be turned off if it gets on your nerves.

The option to start a new game from where you left off the old one will keep the mapmakers happy, but overall this is a below average example of a tried and tired theme.

How come the market seems able to absorb endless jumping, collecting games? The only original thing about this one is the excellent music that bops along as you play. You may be deterred by only having 28 screens which for hardened fanatics won't present much of a challenge. Your egg character and most of the other graphics aren't very detailed, and show none of the humorous touches of other games. Personally I'm fed up with the continual reworking of the platform game.

I must confess it was the music in this game that really appealed to me - a venerable masterpiece. Graphics to me are reasonable (especially the title screen picture) and even though the animation is nothing special, the colours are well used. Unfortunately, this 'arcade puzzle' is in fact... *another* platform game. There are now so many of these that new attempts at the format need to offer something special.

The various screens of Dark Tower present a typical collection of dangers to be negotiated. There are ropes which Harry can use to swing across chasms in true Hunchback style - but jumping on and off requires careful timing.

Also in evidence are falling daggers and slopes, both of which force you to plan your route carefully. The daggers fall behind you effectively blocking your path back, and you can't walk back up a slippery slope once you have started tumbling down it.

Avoiding the baddies themselves, as in most platform games, is a matter of studying their movement patterns and timing your moves carefully.

Graphics 49%
The characters are small and crude.

Hookability 58%
Would be compulsive if it was your first platform game.

Lastability 56%
28 screens, some of them very tough.

Value For Money 41%
It's too expensive for old hat.

Great loading screen but the characters are small and crude and yawn bore, we've seen it before.