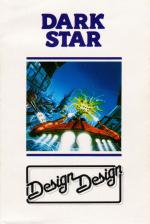 The blurb for Dark Star claims that it is the longest program ever written for the Spectrum. I can well believe it - the game takes around five minutes to load. No super flash loaders here!

It's well worth the wait. Once you delve into the Dark Star galaxy, you'll be hooked.

The scenario is simple. You are in control of the Liar, a heavily-armed space ship, on a mission to liberate the Dark Star galaxy from the Evil Lord's tyranny. To succeed, you must wipe out all the Evil Lord's bases on planets within the galaxy.

You fly around planet-hopping and zapping through hyper space gates to jump from sector to sector blasting the bases and fighting off attacks from enemy space ships.

You fight in space and across the surface of occupied planets - so you begin the game flying through space. A Tactical Sector Map displays the whereabouts of the enemy bases. You can call up the map at any time. It shows the position of your ship and the military installations - and is a really pretty bit of graphic programming!

The map also has an amusing information read-out about the planet you are flying over - with details of atmosphere and comments like "Even wetter than Manchester" or "Hate it!". Great stuff.

Your job is simply to shoot up the enemy installations and then get off the planet to resume your quest for ultimate liberation.

The real joy of this game is the extensive user definable menu which allows you to change virtually every aspect of the game to suit your moods.

The graphics are simple but extremely effective. The 3D star field - with planets and stargates whizzing by - is very pretty. I sat and just watched it for ages!

If you get your hands on one, try switching to wide-angle mode and sitting in a dark room. You'll think you are on the bridge of the USS Enterprise. Try pressing the accelerator button at the top. A real visual treat.

Dark Star is the first part of the "Forbidden Planet" trilogy. I'm waiting with interest for part two.

A real visual treat. You'll think you are on the bridge of the USS Enterprise.