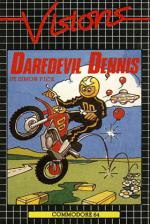 Dare Devil Dennis, 'DDD to his friends', one-time star of the silver screen and Oscar winner for 'Worst Stuntman', has fallen on hard times.

On top of this, his cousin, Douglas, steals his Oscar and challenges the heartbroken Dennis to get it back. That's the background to this excellent game, already available on the BBC.

First, our hero must run across a field. Jumping over flowers and bursting balloons until he reaches the studio. The studio consists of several platforms littered with gaps and jacks which bounce Dennis up onto a high platform.

He can be moved left and right on his motorbike. Pressing the fire button makes Dennis jump, and pulling the stick back gives him a couple of seconds' worth of indestructibility in the form of 'porridge power'.

What this is, is not quite clear, but it certainly seems to do the trick for the stuntman.

Douglas is dropping pieces of Dennis's beloved Oscar onto balloons. In true 'Manic-Miner-on-Wheels' style, Dennis must collect them whilst avoiding a whole host of old film props, ranging from skulls ('Alas, poor Yoric') to teacup-carrying boots and many others in the later levels.

If our intrepid motor cyclist manages to assemble his Oscar, he gets an extra 'take' (life to you!). After clearing eight screens, it's another trek across a field to yet another studio, if you ever get that far.

The graphics are very good, the highlights being the explosion of Dennis's bike and the many highly detailed nasties.

But the objects are randomly positioned, so you occasionally get an impossible screen.

So, if you've ever wanted to make like Evel Knievel, save yourself the broken bones- rev up a tape of DDD.

The excellent music accompanying Dennis's sad story is enough to bring tears to your eyes.

With six difficulty levels and random placing of the objects to collect, there is enough variety for long-term satisfaction.

An excellent example of the programmer's art.

After a sonically and graphically good opening sequence, obviously inspired by the song 99 Red Balloons, Dennis lurched precariously into screens of... platforms! (Groan!)

However, the sound offered some surprises in its solid quality and tone before and after the game itself. But during the game - no tune! Worse still, fewer sound effects.

Dennis bored me quickly - I fired him.

The number of good musical scores is impressive with clear sound throughout, and Dennis is a real menace on his Honda. It's an original game with simple but effective graphics.

At long last - a decent game for the Commodore by Visions.

With six difficulty levels and random placing of the objects to collect, there is enough variety for long-term satisfaction.