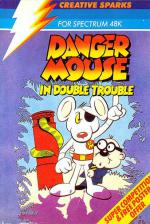 Go on, admit it - you watch Danger Mouse on television, don't you? Well, now you can play and enjoy a highly original and amusing game from Creative Sparks based on the series.

You control the rodent super-agent whose mission this time is to deactivate an android clone of himself. This has been built by his arch-enemy Baron Silas Greenback in a remote jungle.

First you'll have to get there in your flying car but don't expect a quiet trip. Greenback has sent out squadrons of robots to stop you. You must dodge or destroy these using, for some reason, a note from the car's juke box. Strange, but fun.

Once in the jungle, you jump crocodile-infested rivers and move any pumas blocking your path by starting an elephant stampede with your Tarzan call. Honest!

However, all this is nothing compared with the final stage. In order to disable your double you must press certain buttons, which Greenback has somewhat discourteously surrounded with a high voltage fence. So how do you press them? Yes, you've guessed it, you jump over the fence and balance on the buttons with your index finger! Who said Spectrum software was all the same?

What really sets the game apart from the crowd is the quality of the graphics. All the characters are easily recognisable and well animated, especially Danger Mouse.

My only important reservation with this game is the possible lack of really long-term appeal. With only two skill levels, the tasks might get a little easy after a while. Still, this is a beautifully presented game and should be immensely popular with all Danger Mouse fans.

This game is definitely for the young-at-heart. The graphics are amazingly detailed and are so cartoon-like that anyone coming into the room could be forgiven for thinking that this was the real TV cartoon. DM and Penfold move magnificently.

The sound has been well thought-out with car motors, crocodiles' teeth snapping and of course there's the Danger Mouse theme tune. I found this game amusing and addictive. I mean it can't be anything *but* addictive when you're everyone's favourite superhero, trying to save the world.

Thorn EMI are one of the few "big" companies that have entered the software market and have produced high-quality software under the "Creative Sparks" label. Danger Mouse is a good example.

I hope this is only the first in a series of Danger Mouse games.

The jungle screens take time if you can be bothered to get the bonus. The android-mouse finale is fairly entertaining but it won't have you fainting with excitement. Danger Mouse is not a game I would recommend.

I found this game amusing and addictive. I mean it can't be anything but addictive when you're everyone's favourite superhero, trying to save the world.