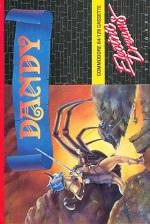 Thor and Sheba are the two main characters in Dandy, a one or two player, flick-screen maze game. They have been locked in an environment consisting of fifteen dungeons, and they have to make their way through the complex before their allotted 1,000 energy points run out.

Scattered throughout the dungeons are keys, food, treasure and spells - these are automatically picked up on contact. All collected items are displayed at the bottom of the screen, along with a numerical representation of energy remaining. Collecting food automatically increases the energy total by fifty points, and treasure can be traded in return for ten energy points. Spells can be cast to either kill, paralyse or disorientate the oncoming enemy. However, care must be taken not to shoot any of these objects, as this completely destroys them - occasionally making the completion of a dungeon impossible.

Three types of enemy creature inhabit the dungeons - hooded monks, demon heads and spiders. Spiders are the most numerous and also the easiest to kill, taking only one shot to destroy them - demons and monks are a little more resilient however, and need five shots to ensure their destruction. Demon heads appear from the dungeon walls and follow the characters everywhere, while Monks and spiders tend to be in the vicinity of the lifts from which they emerge.

Disposing of all the opposition on-screen allows you to destroy the lifts, effectively preventing them from reappearing. Teleporter pads (black disks within a square) transport the characters randomly from pad to pad, thus giving access to totally enclosed rooms.

To progress to the next level, you have to battle through each dungeon and find the trap door - but hurry, that energy is disappearing fast!

Let's face it - any Gauntlet clone released now has missed the boat. Mind you, I don't think this would have ever caught it in the first place. The graphics are sub-standard: small, poorly defined sprites skate about over a series of equally badly drawn backdrops, and the sound is pathetic.

The whole program is really badly designed - both players can wander off the screen in opposite directions and it's not really clear what should be shot or picked up. Another minus point is that there are only fifteen levels - if you want to play a Gauntlet game you might as well buy the real thing.

There are two major problems with Dandy: first, the graphics are terribly unclear and only serve to confuse the proceedings - and second, it's flick-screen, which doesn't suit this type of action at all. The pace is slow, and it wasn't long before I became frustrated and completely bored with the whole thing.

There are far better Gauntlet variants available than this - it's even worth considering Mastertronic's Storm as an alternative, as it's not quite as bad as Dandy and costs considerably less.

If Dandy had appeared in the early summer before all the other Gauntlet variants, I might well have thought better of it.

Unfortunately, I've seen how good these games can be on the C64 and Dandy doesn't rate at all. It began to annoy me after a very short amount of play - the dungeons are all very similar, so monotony sets in once you've gone through a couple of them.

The graphics are generally sloppy, and it is very easy to lose your player amongst the masses of dungeon dwellers as they are the same colour. The sound is also dire - there's no music, and the spot effects used could easily be reproduced on a Spectrum.

I can't recommend this, as it quite simply offers awful value for money.

Presentation 51%
A two-player option, but lacking sufficient instructions and a title screen.

Hookability 34%
Initial interest might be generated due to the Gauntlet overtones.

Lastability 23%
The frustrating and tedious nature of the game soon repels.

Value For Money 20%
Ludicrously overpriced for such a poor game.