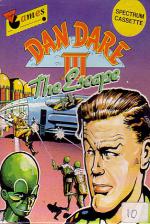 Having defeated the evil Mekon in his previous two exploits, Dan faces the Big Greenie once again - only this time, the Mekon has got wise.

Dan's basic aim is to collect enough fuel to escape the Treens' domain, but the only way he can travel between levels is via a teleport. And who's got the teleport key? The Mekon. Or rather, giant holographic images of the Mekon, which act as end-of-level guardians to defy daring Daniel: the body-coloured alien chief is too cowardly to fight Dan in straight combat.

Our hero flies around in a jet-pack, armed with a trusty three-level plasma gun to kick alien ass: contact with baddies drains his energy. If he accesses a terminal, however, he can buy more goodies, from extra lives to a smart bomb. Once he's plundered a level of its objects, daring Daniel travels to the next via a Master Of The Lamps-style fly-through-the-squares teleport system. 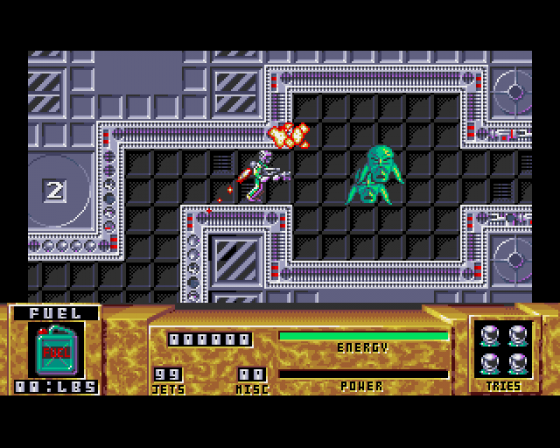 The only thing wrong with Dan Dare III is its simplicity. The graphics are among the best I've seen on the Spectrum - very colourful, with some superb explosions and neat animation - and the sound is OK, basic effects mixed with occasional jingles.

Some of the aliens (apart from the inflated Mekon) don't look very "Dan Dare-ish", varying from bug-eyed fish to misshaped armoured blobs - but that doesn't detract from the game's appeal.

The gameplay itself though is pretty basic, like its immediate predecessor: shoot baddies, collect fuel and weapons, and defeat the Mekon to finish the level.

Dan Dare III is full of nice touches, and is worth a look just for the graphics - it offers plenty of short-term fun but doesn't have the depth to keep you playing for weeks.

The graphics and sound are great, and the gameplay is very addictive in the short term. The only trouble is, like the Spectrum version, it lacks long-lasting appeal.

The graphics and sound are great, and the gameplay is very addictive in the short term.