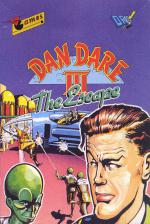 Ever had to wait a long time for something? Perhaps it was long trousers at school (especially in winter)? They took ages, but were worth it all the same. Or maybe exam results kept you on tenterhooks? Or then again, perhaps it was losing um, your... er, another thing. (Ahem.)

Anyway, whichever it was, you'll know just how I've been feeling about Dan Dare III. I've been waiting for it for blooming ages! Y'see, the basic game (but without the Dan Dare bits) has been knocking around in the bowels of developers Probe Software for nearly a year! The first I heard of it was when Duncan came running back from visiting them in Croydon, all fired up about this new project they'd developed on the side, but hadn't found a publisher for yet. "It's brilliant.' he burbled excitedly. "It's really, really colourful, the explosions are fabby, it plays really well... and I don't remember what it's called." Oh brilliant, Dunc. Try. "Um... It's Crazy Jet Racer or Unicycle Racer or something." he eventually offered. Since then we've kept a bit of an eye on it waiting for a big company to pick it up. Finally Virgin did. and the rest is history.

So was Duncan right? Well, yes, I'm happy to say he was! Dan Dare III is really, really colourful, the explosions are fabby and it plays very well indeed. It's perhaps a bit thin, so you might complete it rather quickly, but everything that's here is choice stuff.

First, there's Dan himself. In his green space fleet uniform and peaked cap he looks a little stunted, but more or less exactly as a Pilot of the Future should. He can't walk, but flies along with his little jet pack, floating down to earth whenever you stop propelling him forward. This is handy, because it frees up the Down control to flick through your inventory of weapons. There's a plasma rifle with three levels of firepower, bouncing bombs (which can be sent out in a train in front of Dan to clear any narrow passages) and smart bombs to clear the screen. The baddies are perhaps even more impressive, but disappointingly un-Dan-Dare-ish. You can't really complain about the Mekon who looks the splitting image of his original comic namesake. Except! It's not the Mekon at all, but merely a series of giant size projections of his image which act as end-of-level guardians (which may explain why he's about 16-feet tall, instead of Jackie size like he was in the comics). As for the rest of the baddies, they're apparently the mutated failures of 'treenisation' experiments that the Mekon has been playing about with, and take the form of fat, floating fish, purple pod things and various other bug-eyed monsters. All very colourful and tricky to kill!

The game itself is your standard 'fly about a bit, explore the tunnels, collect fuel, open doors and collect keys to operate the teleport to the next level' shoot-'em-up. In between levels (or on the way to the shop where you can restock your arsenal) you have to go through that old chestnut the 'time tunnel', whizzing through space trying to stay inside a series of boxes. Tricky stuff! So here's the weird bit and it's obviously a remnant from the Crazy Jet Racer days - Dan seems to have gained a tail or, um, 'thingie' between his legs!! Blimey! It must have started life as a unicycle or something, but why they haven't removed it now I don't know.

So, what's the verdict? Well, it's funny, but our reaction is more or less the same as it was to Tintin On The Moon last month. I mean both feature classic comic characters, both were done by Probe, both have running-about-collecting-things gameplay, both have into-the-screen scrolling flight bits between levels, and both are corkendously colourful! Blimey! Kissing cousins, or what? But the similarities don't end there! They're both just too small, and don't take too much trying to complete, it's a real shame because the size stops it really being Megagame material.

Still, it's pretty darn spanky! It might well be the prettiest, most colourful game ever seen on the Spectrum (if not it's pretty damn close) and although that play area may be a bit tiny it's still an excellent game.

So close to a Megagame, but not quite close enough, Dan Dare III has gorgeous graphics and great gameplay but there's not all that much there. Shame.