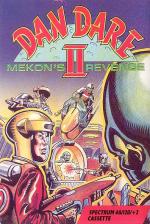 Heroes don't come more heroic than this. Dan Dare, clean-cut, square-jawed, stiff-upper-lipped, all British good guy who will never let you down.

He's the sort of chum you need in a tight corner - when the Mekon, evil scientific mastermind leader of the Treens, is threatening to overrun the Good Ship Earth with a genetically engineered race of Supertreens, for instance.

These Supertreens are kept in Plexiglass Life Support Systems throughout the four levels of the Mekon's spaceship. He must discover and explore all the levels, find all the Supertreens, sabotage their control boxes to activate the level destruct sequence.

However, the destruct sequence starts from the very first moment Dan blasts the control box. And that means he only has limited time to destroy all the other controls and escape to the next level.

If you don't want to play the good guy, you can take on the character of the Mekon. He also must locate the Supertreens and then activate them. Dan Dare's arrival in the craft has activated the destruct squence, so he - or it - is also up against time.

The Mekon's ship is like a huge maze, filled with Treen guards on jetbikes equipped with lasers, forcefields, lasers and, of course, your own space pilot pals.

The Mekon vessel is shown in cross-section; the main features of which are:

In a straight head-to-head (rather unfair, I know) I plump for the Spectrum version as the victor. It's colourful and - although at times it was a little difficult to distinguish the good guys from the bad - it was more playable and I was able to get further into the game.

The Amstrad Dare, while quite nice to look at, felt a little "dead" on play.

Although quite playable in a fairly unoriginal way, I still feel Dan Dare And The Mekons as a concept has a lot more to offer than this game achieves. Will there be a Dan Dare III?

Although quite playable in a fairly unoriginal way, I feel that the game concept has a lot more to offer than the actual game achieves.