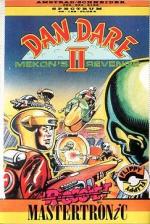 In this sequel to Dan Dare, the Mekon again has a despicable plan to wipe out life on Earth. He has developed a race of Supertreens with his genetic experiments. This time around you can be either Dan Dare or the Mekon. Nice to be the bad guy for once.

The fate of the Earth is in your hands and it will be decided inside the Mekon's battleship. The battleship is divided into four levels which are connected via blast doors. Blast doors are impervious to lasers and explosions. To open them, you must kill all of the Supertreens on a level if you are Dan Dare or activating them all if you are the Mekon. Killing or activation of the Supertreens involves shooting their life support system. Forcefield generators appear throughout the battleship and these must be deactivated by shooting them to allow access to other parts of the level.

Other than Dan and the Mekon, there are also Treens and Spacefleet forces fighting each other. The combat goes on continually and you have to take care not to get caught in the crossfire. Hits from lasers deplete your energy and if it run out you lose one of six lives. Lives are also lost if you get stuck in a garbage disposal unit and are crushed. Loss of a life returns you to the start screen of the level. Bonus lives are awarded every 50,000 points.

The sequel has much the same qualities as the original. There's plenty to shoot and explore, and although it starts off difficult you can quickly start to get somewhere in the game. I don't think the graphics are quite as atmospheric as the original's, but they are still varied and attractive.

Nice touch that you can play the Mekon, which you can try after completing the game as Dan.

The graphics aren't as pretty, but the game plays just as easily.

Sonics 28%
N. No tunes and the effects are poor.

Staying Power 74%
P. Four large levels full of enemies to kill.
N. A bit too simple to complete the game

Overall 78%
P. A good follow-up that will keep fans of the original very happy.

Other Amstrad/Spectrum Game Reviews By GBH

A good follow-up that will keep fans of the original very happy.