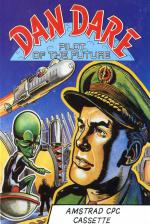 Dan Dare lives dangerously. Most of the time he has no choice - heroic deeds are forced upon him because he's the bravest guy around. This time the nasty Mekon has decided to hold the world to ransom. Dan's just about to receive the highest accolade of all - an appearance on 'This is Your Life' - when the TV waves are unceremoniously taken over by the ugly visage of the Mekon. Earth must either submit to him as commander of the universe or accept the dire consequences...

The Mekon has hollowed out an asteroid, the size of a small planet, and has set it on a collision course with Earth. If Earth agrees to the Mekon's demands, the nasty asteroid will be detonated and the Earth rendered safe again. The only snag is that a green slimy alien will rule the world. Is the Mekon going to get his wicked way? Not if Dan Dare can help it!

Accompanied by his faithful friend Digby, Dan Dare sets off in his speedy spaceship, the Anastasia, and heads for the approaching asteroid. When they arrive on the Mekon's space projectile, Dan leaves Digby to guard the ship and starts to explore the asteroid. He has a mere two hours at his disposal to save the world from alien domination.

Dan soon realises his task is going to be far more difficult than he first thought. For one thing the asteroid is inhabited by Treens, alien, troopers guarding the Mekon's blackmail vehicle. Should a Treen catch up with Dan, the hero loses energy and might well be taken prisoner. Treens can also knock him out which, like doing a bit of 'porridge', loses Dan valuable time. Laser bolts fired by the automatic defence systems (and the Treens) are also bad for Dan's health and well-being. Fortunately Dan is not defenceless, and is equipped with a nifty laser gun which makes short shrift of any Treens that get in the way of a laser blast.

Dan finds himself in a subterranean world in which there are five levels. He has to find his way through a network of floors, travelling up and down in lifts, until he finds the self-destruct mechanism which will obliterate the asteroid before it has chance to collide with the Earth. To do this, however, five vital pieces of the mechanism have to be found and assembled in the control room - one part of the contraption has been hidden on each level. The lifts work sporadically, and indicator arrows reveal the directions of travel available.

Dan is a superfit fellow, capable of moving left and right, up and down, and he can jump over chasms and duck to avoid Treen laser bolts. To help him in his quest, a variety of objects lying around can be collected by jumping onto them, including bullets to boost his arsenal and pills to increase his energy.

As the game loads, the faces of the two protagonists - Dan Dare and the dreaded Mekon -are displayed on screen, and the action starts with the Anastasia speeding towards the asteroid. The game follows the flick screen format, with the status area below the action zone. The total score and the amount of time Dan has left in hours, minutes and seconds is displayed and two bars indicate the strength of Dan's arsenal and his energy level.

During play, screen captions in the style of the original comic strips pop on screen from time to time to explain what has happened to Dan - when he's knocked unconscious, for example. If Dan manages to thwart the Mekon's plan, the Anastasia is shown speeding away from the asteroid just before it explodes and then the end sequence displays the explosion itself.

The graphics are excellent and colour is very cleverly done, leaving a bright and attractive game.